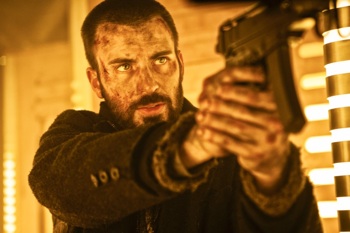 Inkoo Kang: One of the most fascinating aspects of the film is that Chris Evans' character, Curtis, is a very untraditional Hollywood hero. He does several things that you would never expect, say, Bruce Willis to do.

Joon-ho Bong: Yeah, he cries twice and he abandons [SPOILER]. As I was writing the script, I didn't imagine [Evans] as Captain America. [Curtis] is a very dark character, and physically he's moving forward in the train but he's mentally stuck in the past, in the back of the train.

Chris really wanted to do the movie. Although he's very proud of his work on the Marvel films, between those big projects he tries to do more interesting films like Puncture and Sunshine. I was excited to show a different side of Chris Evans.

Inkoo Kang: How did Tilda Swinton, who dominates every scene she's in, get cast?

Joon-ho Bong: At the 2011 Cannes Film Festival, I was there as a jury member for the Camera d'Or [prize] and she was there in competition for We Need to Talk About Kevin. We met for brunch and said we're both fans of each other, [so] let's do something [together].

The character she ended up playing was a male character in the script. So there's a gender change, but Tilda Swinton transcends gender. She embodied Minister Mason naturally; she melted into the character. And at that point in her career, Tilda just wanted to do something fun. Her previous films took a long time to make and they were very heavy roles that were hard to do. So she just wanted to play.

The funny thing is, we did a gender change, but all the dialogue and all the details of the character are the same. The other characters [still] call her "Sir."

Inkoo Kang: Can you talk about which movies you were interested in or influenced by when making this movie?

It's a totally different film, but I rewatched the later part of Wall-E. The people inside the spaceship, the fat people. They were on that ship for hundreds of years and that's how they got fat. It reminded me of the front-section passengers [in Snowpiercer].

Inkoo Kang: How did you come up with the film's structure, where each new railcar feels like you're entering a different universe every twenty minutes?

Joon-ho Bong: The different train sections -- the structure was very critical because the way the train cars are divided, it's part of the narrative.

Because it was such a limited budget, I didn't want to shoot anything that would be taken out in editing. In the script-writing process, I took out everything I didn't think was absolutely necessary and only shot what was absolutely crucial to the story. So I ended up making 26 train cars, and we see all of them in the movie. 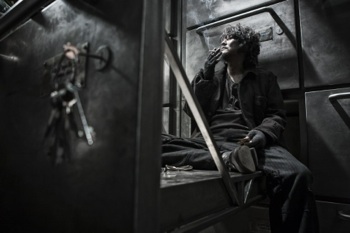 Inkoo Kang: In mainstream Hollywood movies, you almost never see interesting Asian/Asian-American characters, but here Kang-ho Song and Ah-Sung Ko, who plays the po-faced safecracker and his resourceful, possibly psychic daughter, are the two most interesting characters in the film. Was that at all on your mind when you were writing your script?

Joon-ho Bong: Yes, exactly. Those two characters are not in the graphic novel, like Tilda Swinton's [female] character. As an audience member, I hate, for example, the characters in Memoirs of a Geisha. As an Asian audience member, it's very strange to see a Chinese actress for a Japanese geisha role speaking English.

I wanted to get away from the stereotype of Asian characters being really good at martial arts or having some sort of strange and evil tendency. I really wanted Song to speak in his native language and, because it's a sci-fi film, you can have a device like the [instant] translation machine.

Comparing it to Star Wars, Luke Skywalker is the main character but it's Han Solo who changes the flow of the narrative and is actually the more interesting character. He's the joker. [Like Song's safecracker character,] he's the hidden, real lead of the movie.