Movie tie-in games have been making the move to mobile... for better or worse.

What do Captain America: The Winter Solider, Godzilla, and X-Men: Days of Future Past all have in common besides being some of this summer's biggest movies? All three skipped consoles in favor of smartphones for their official video game appearances. The increasingly strict demands of the console market and the continuing rise of smartphone gaming have turned movie tie-ins and mobile apps into a real-life Hollywood romance.

"The people that used to buy $40 movie licensed games now just look for stuff on mobile," says Chip Sineni, Director at Phosphor Games, the studio behind mobile movie games like last year's Man of Steel and World War Z. "Consoles are now only about that core group of people willing to spend $60 for something very unique. That old market is gone."

Steve Bowler, Lead Designer at Phosphor, agrees, "Over the past four or five years, the industry has gone more towards AAA. There's almost like AAAA status now. You're going really big, you're going home, or you're doing both like Irrational." But the long development cycles of big budget games clash with the film industry's faster schedules. "A movie can go from being green-lit to having a script written to being out in theaters in less than two years, sometimes as little as 12 months. That time frame is way too short to have the same kind of production values console gamers expect. That's why I think a lot of people say movie games are awful."

But even with the lower stakes, different movie licenses present their own particular challenges on mobile. "People say you can't make a good Superman game, so I was a little afraid of taking on the license at first. How do you have a godlike character and still make it fun?" says Bowler. Fortunately for Phosphor, the team received a very intimate look at the source material from the Man of Steel director himself. "We got to sit for an hour or two in Zack Snyder's personal editing lab and ask him about the movie," says Bowler. "He liked what we did in our last game, Horn, capturing big cinematic combat moments on a small device. So he wanted to see beats be more like the fight scenes in the movie. We got great feedback that completely changed our direction."

However, studios working on movie tie-ins rarely get that level of access, especially when the film faces production problems of its own. "With Paramount and the World War Z game, we never got to meet with any creatives because obviously the movie was a bigger priority and it needed everyone's attention," says Sineni. "The game was already done when the movie ending changed. We were even wondering at the time if the zombies ever moved slowly. We had to make gameplay based assumptions." 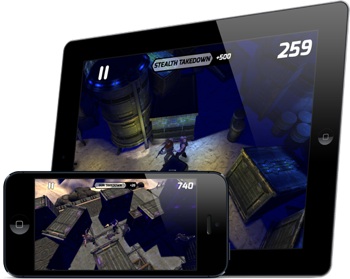 And just like there are various ways to make a licensed game, there are various ways to enter the business of making licensed games. As an established developer in the movie game space, Phosphor uses an agent and existing film studio contacts. They even occasionally get cold-called. Meanwhile, when developer Gaming Corps set out to make its debut game, CEO Nicklas Dunham gave one of his old friends a call. "I always kept contact with Vin Diesel's agent, or Tigon Studios as his game studio is named," says Dunham. "So when the new Riddick movie was going to be released, I thought, 'Let's do something with it!' and we partnered with him to make Riddick: The Merc Files on mobile."

During his time at Swedish developer Starbreeze Studios in 2004, Dunham helped create The Chronicles of Riddick: Escape from Butcher Bay, one of the most acclaimed modern licensed games. Afterwards, he moved to GRIN making games based on movies like Terminator Salvation and Wanted. Now, as head of his own studio, Dunham wants Gaming Corps to be "the best movie franchise game developer," and when the time came for his team to choose its first license, coming back to Riddick a decade later was "the only natural choice."