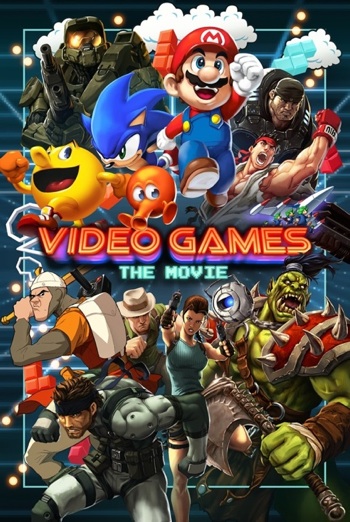 It's hard not to love the nostalgia trip that is Video Games: The Movie.

Sometimes you want to watch something that's deep and thought-provoking... and sometimes you want to watch something that's lighthearted and fun. Video Games: The Movie is a documentary about games and gamers that falls firmly into that second category. The flick covers the history of gaming and the rise of gamer culture with an upbeat attitude that skims past the seedy side of gaming to celebrate what we all love about playing video games.

This documentary is no hobby project -- last year it raised over $100,000 on Kickstarter to cover post-production costs -- and the finished product has the glossy shine of a just-opened video game box. The film combines video game footage, informative infographics about gaming, interviews with gaming luminaries past and present (like Rob Pardo, Cliff Bleszinski, and Nolan Bushnell), and narration by Sean Astin into a thoroughly enjoyable product that's downright gorgeous.

Video Games doesn't cover much new ground for gamers in the audience, as it spends no small amount of its 100-minute running time arguing against gamer stereotypes. Games have grown up and so have the people who play them: the average gamer is 30 years old and nearly half of all gamers are women. With interviews and statistics, the movie paints a portrait of gamers that's a far cry from the common image of gamers as teenage boys. And, really, the fact that this documentary even exists speaks to how accepted gaming has become by mainstream culture. Being a geek is "in" these days and gaming is no longer the shunned hobby it once was.

The film was clearly made by people who love playing games, and the love of the medium colors the entire project. Though it makes this a happy nostalgia trip through gaming's past, it does skip past some issues where more in-depth discussion -- especially considering the fantastic interviews Video Games lined up -- could have been interesting. Violence in games is discussed briefly, but mostly shrugged off (though Video Games Live's Tommy Tallarico does get the film's best one-liner here with "Hitler didn't play Crash Bandicoot"). Whether video games are art is also discussed briefly, but without coming to any particular conclusion -- and the film's lack of answers on these matters is a long way from satisfying.

But Video Games covers a lot of ground, moving from early computing -- and early games -- all the way up to the present day battles between Sony, Microsoft, and Nintendo for gaming dominance. The film jumps around chronologically as it moves from issue to issue but keeps you following along with a nicely rendered visual timeline that clarifies when you are in the story before jumping to the next segment. It could be a confusing technique, but instead it keeps the story moving at the speedy pace required to cover the history of gaming in just over an hour and a half. If the film had gotten bogged down in meatier questions, it could have easily been twice as long... and not nearly as fun of a ride for it.

For all I wonder what kind of film this might have been if it had dug a little deeper, its tremendous enthusiasm for its subject is contagious. Extended video game montages play through the opening and closing credits, presenting a high-energy nostalgia trip that any gamer is certain to appreciate. If you love games, you'll find something to love about Video Games: The Movie -- and if you aren't a gamer, this film presents an interesting insight into gaming's history and place in our culture.

Video Games: The Movie comes out on July 15th for download and streaming -- but for those who would rather catch it in theaters, it will be showing in select cities in July and August.