Doctor Who is coming back this weekend, so it seemed like a good time to reminisce about our favorite things about the show.

It's no surprise: a lot of us here at The Escapist really dig Doctor Who and we couldn't wait until this weekend's season 8 premiere to talk about it. So instead, we gathered up our favorite things about the current run of the show -- or "New Who" for the classic series fans in the audience would call it -- to gush about. 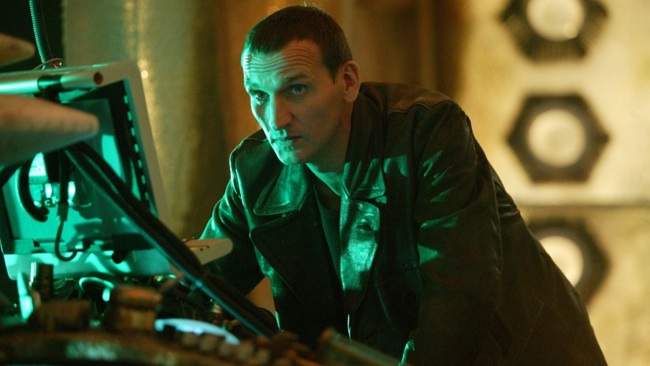 Christopher Eccleston as the Doctor
Elizabeth Harper says: After 16 years off the air, Doctor Who finally returned to television screens, with a new modern aesthetic -- and a new Doctor, of course. Though Eccleston's run as the Doctor was short -- lasting only 10 episodes -- it will always be memorable for giving us our first look at the Doctor after a long absence. The 9th incarnation of the Doctor felt like something new, with his stark leather jacket and loner attitude... but there was something familiar, too, in his devil-may-care attitude and his cheeky comebacks.

Eccleston may not be many viewers' favorite Doctor, but he was a great choice to bring the show back on the air and tell the story -- a fairly dark one -- of the Time War he's fought in while he's been off-screen. The only problem with Eccleston's tenure is that it's so short: we never had a chance to see where he might have taken the character if he'd had another season or two.

John Barrowman as Captain Jack Harkness
Marshall Lemon says: Doctor Who has some strong pulp sensibilities, given the constant alien invasions happening in any given season. But where The Doctor meets threats on an intellectual level, Captain Jack Harkness scales the pulp factor up to 11 with a direct, physical approach. A swashbuckling figure with a charismatic personality, Captain Jack (played by John Barrowman) is a former Time Agent and con man inspired by The Doctor to become a true hero. Eventually granted immortality and lost in time, Captain Jack continues to follow The Doctor's ideals, despite a willingness to solve problems using guns and his fists. Captain Jack also explored darker aspects of the Doctor Who universe, specifically in the Torchwood spin-off series, but is generally at his best facing down monsters and hitting on anyone in the vicinity... whether male or female.

You see, Captain Jack isn't just The Doctor's action-focused companion, he's also an overt attempt to address sexuality on mainstream television. Originating from an time period where humankind became sexually flexible, ("He prefers the term 'omnisexual'"), Captain Jack was the first Doctor Who character to depict non-heterosexual lifestyles in a positive way. Often flirting and entering relationships with men and women alike, Captain Jack became a role model for gay and bisexual fans as well as an immensely likable character. It's just too bad we haven't seen more of him since Season Four, so here's hoping he'll teleport his way into future episodes.