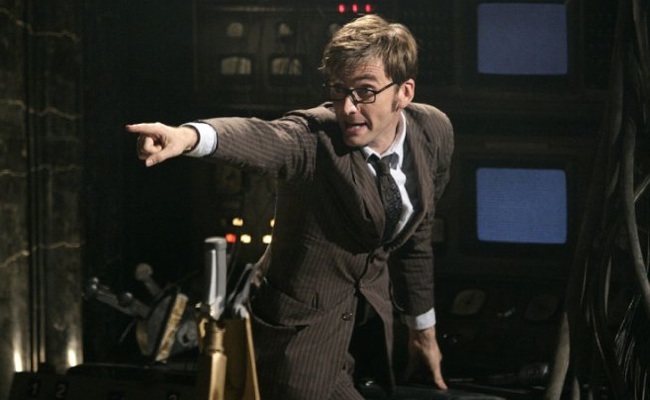 David Tennant as the Doctor
Josh Vanderwall says: While Eccleston and Smith certainly had their charm -- black leather coat and snarky personality, and crazy hair and awesome bowtie -- David Tennant really shines as the greatest of the latest set of Doctors. Tennant exuded enthusiasm in every single episode -- for the character, the setting, the lore -- and really brought the show to life for me. With a uniform of a 3-piece suit and a pair of Chucks, Tennant's Doctor was vibrant and charismatic, while being stylish yet sensible. Sure, I'm a bit biased from years of dressing quite similarly, but it's not just the familiarity that Tennant's garb offered that drew me to him. It's more of how he expressed his character through his attire.

Of course, Doctor Who is nothing if not a social creature, and Tennant also had the best companions alongside him. From Rose Tyler to Martha Jones, Tennant's interactions with his companions were, at least for the most part, genuine and compassionate. Then, of course, there's River Song, whose interactions with Tennant trump any other doctor, hands down. I love the idea of her character, and I think Tennant is the one that best represented how The Doctor would actually react to the situations they find themselves in.

Not only is he well dressed, witty, and charming, but he's also the prettiest Doctor we've ever seen, and sometimes, you can't help being a bit shallow.

"Army of Ghosts" and "Doomsday"
Marshall Lemon says: The Daleks and the Cybermen are among the oldest and most recognizable of The Doctor's enemies, making regular appearances since their 1963 and 1966 debuts. Amazingly, the two races wouldn't meet for another four decades, partly thanks to opposition from Dalek designer Terry Nation. It wasn't until David Tennant's debut season, during a seemingly unrelated investigation, when the Daleks and the Cybermen finally appeared... and promised to destroy each other. The subsequent battle, which encompassed the entire planet, was a massive payoff for Whovians of all stripes and remains the most memorable action sequence of Doctor Who's 50 year history.

But these two episodes weren't special just because they offered a Dalek-Cyberman showdown: it's because they resolved two seasons of plot points in the process. Everything from the fate of Torchwood, to Rose Tyler's farewell, to Jackie and Pete's (sort of) reunion was neatly tied up in a two-part storyline, perfectly balancing cosmic warfare with heartwrenching human drama. That kind of achievement is hard to reach in any medium, and Doctor Who somehow pulled it off with flying colors and a gorgeous soundtrack.