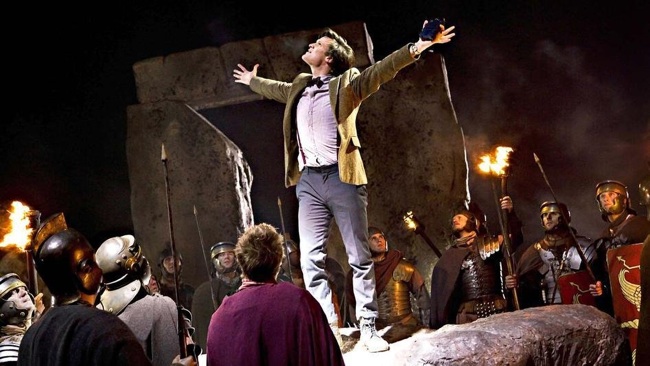 Matt Smith as the Doctor
Dan O'Halloran says: As the 11th Doctor (not counting the War Doctor, of course), Matt Smith brought a wonderfully refreshing joyousness to the role. The previous two incarnations of the Doctor were struggling with the pain of their decision to wipe out their own race to defeat the galactic threat of the Daleks, but this Doctor shook off the doom and gloom of tragedies past and boy, did Matt Smith run with it.

From the first moment we met him, Matt Smith perfectly portrayed the Doctor's infectious enthusiasm while taking in the world with newborn wonder. Who can forget the scene where he ate fish sticks and custard with his future companion (and mother-in-law), Amelia Pond? Or, by the end of that first episode boldly talking down an alien invasion in what was to become a signature monologue for the character.

From playing the sheriff of a western town to struggling to deal with the sexy, difficult human representation of this TARDIS, Matt Smith carried every episode with wit and charm and energy. And some of the Steven Moffat scripts certainly needed it.

Karen Gillan as Amy Pond
Elizabeth Harper says: Amy Pond catches a lot of flack for wearing short skirts, but she's a character with more depth than she's often given credit for. Amy's unique amongst the Doctor's companions in that we first meet her as a child. Young Amy (played by Karen Gillan's cousin Caitlin Blackwood) encounters newly-regenerated Matt Smith crash-landed in her back yard. It's something any adult would have questions about, but Amy takes it in stride as only a child could.

Asking if he's a policeman come to fix a crack in her wall, she proceeds to let him into the house, feed him increasingly bizarre combinations of food ("New mouth, new rules"), and make some creepy proclamations ("You know when grown-ups tell you everything's going to be fine and you think they're probably lying to make you feel better? Everything's going to be fine") before he rushes off to see to his TARDIS, with a promise to be back in 5 minutes.

But, of course, the Doctor isn't exactly known for his punctuality and when he returns, it's 12 years later to encounter a very different Amy Pond. In this time, Amy's grown rather cynical and doesn't entirely believe that the Doctor is her imaginary friend from all those years ago. The end result is that Amy goes her own way and stands up to the Doctor... and if she happens to have a crush on him, we can hardly blame her.

Have your own favorite Doctor Who characters, episodes, or moments? Tell us about them in the comments!