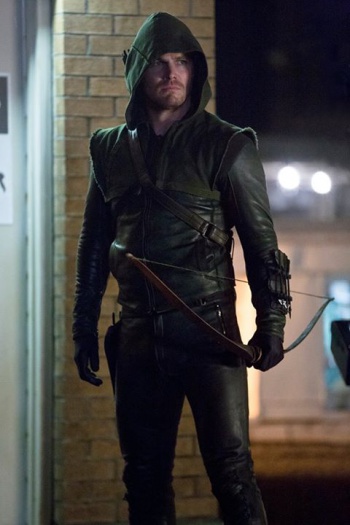 Get ready for the third season of Arrow with our recap of the first two seasons!

The CW's Arrow, based on the DC Comics' character Green Arrow, has had steady success since its premiere in 2012, even launching the spinoff show The Flash. Billionaire vigilante Oliver Queen is back on the CW on October 8, and I'll be bringing you weekly reviews of the archer's exploits. To get you up to speed, I've recapped the first two seasons, starting with a spoiler-free introduction to the faces and names you need to know.

The only son of billionaire Richard Queen, Oliver was the only survivor when his father's boat went down on the way to China. Oliver was stranded on an island called Lian Yu for five years. While on that island, Oliver was forced to survive, and to learn the skills that allow him to be the vigilante known as The Hood. For those that cringe at the suggestion of an island full of mysteries, don't fear -- the truth about Oliver's time on the island is slowly but steadily revealed through flashbacks. Just before the events of the island, Oliver's father gives him a book of names, demanding that Oliver survive to right the wrongs that have hurt the people of his home, Starling City.

Oliver Queen gets an exuberant homecoming welcome when he returns to Starling City, and soon picks up a few new friends to help him in his quest to save the city.

John Diggle: Former military bodyguard, John "Dig" Diggle is the snarky, insightful moral center of the show. Dig isn't afraid to call Oliver out on his inconsistencies, moving easily between the roles of partner, mentor, and friend to the vigilante billionaire.

Felicity Smoak: The wildly powerful and undefined hacking ability of Felicity Smoak has gotten Oliver through military-grade encryptions, pulled data from the F.B.I., and instantly supplied schematics of buildings all over Starling City.

Thea Queen: Oliver's sister, Thea, has spent the last five years struggling to grow up and deal with the loss of her father and brother, while her mother grew more and more distant.

Tommy Merlyn: Oliver's billionaire best friend, Tommy is the only son of Malcolm Merlyn, an old friend of the Queen family.

Laurel Lance: A lawyer in Starling City. Before the boat crash, she was Oliver Queen's long-term girlfriend. Her sister, Sara, joined Oliver on the boat trip, and died in the crash.

Quentin Lance: Detective with the Starling City Police Department, Quentin blames Oliver for the death of his daughter, Sara, and the subsequent breakup of his marriage.

Moira Queen: Oliver's strong-willed mother, with many secrets to hide.

Now on to the season recaps! Here be spoilers.