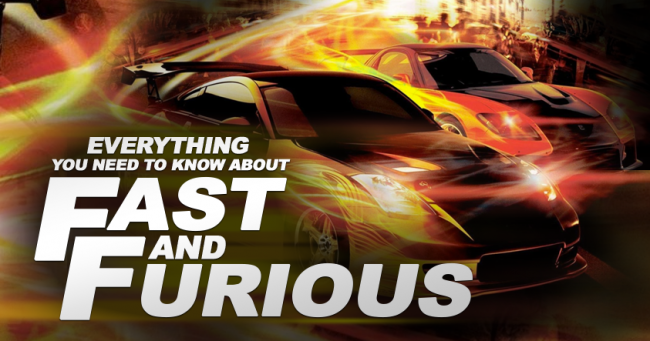 Consisting of a whopping seven movies - and with an eighth already planned - the Fast and Furious franchise has been putting Vin Diesel in fast cars since 2001. The seventh movie in the series, aptly named Furious Seven, hits theaters this week, so here's a crash course on everything you need to know about each of the films in order to bring you up to ... well, speed.

The Fast and the Furious

The Fast and the Furious was the first in the Fast and Furious series, both chronologically - since this is a series that does not have all of its events happen in the order in which they were released as films - and by being the first one to be released. It introduced us to four character mainstays in the franchise - as well as a couple who would appear in at least one other installment - got us to begin thinking about how important family is, and gave us some decent car scenes. It also made the careers of Vin Diesel and Paul Walker.

Brian O'Conner (Paul Walker): Our leading character. A detective working for the LAPD who is sent undercover by the FBI to investigate a series of on-the-road thefts by people who drive cars really well. He used to be in trouble with the law for boosting car, but is now clean. He falls in love with Mia Toretto.

Dominic "Dom" Toretto (Vin Diesel): The leader of a gang of street racers who drive cars really well. His motto is "I live my life a quarter-mile at a time," which is this series' "YOLO." He is barred from official races after beating on someone nearly to death with a wrench.

Mia Toretto (Jordana Brewster): Dom's sister. Brian's love interest. Not part of Dom's gang and not happy about Dom's criminal activity, because she worries. She's also an exceptional driver, which serves as foreshadowing for later.

Letty Ortiz (Michelle Rodriguez): Dom's long-time girlfriend, part of the crew, often second in command. Not a particularly relevant character in this film, but will become one later on, starting with Fast & Furious.

Jesse (Chad Lindberg): Dom's friend, the "extra" one who exists in order to die to hammer home the importance the movie places on family. Part of the crew.

Johnny Tran (Rick Yune): The film's villain. He runs a rival gang and is a suspect in the hijackings Brian is investigating.

Brian O'Conner wants to get into Dominic Toretto's gang by beating him in a street race. He doesn't win, but, he does help Dom escape from the cops after the race, thus earning his respect. That earns him a place in Dom's gang, which essentially makes him part of the "family," even though Dom and his sister, Mia, are the only ones who accept him; the others, particularly Vince, are hostile toward him. Brian and Mia begin to date right after he joins the group.

The FBI moves in on Johnny Tran after Brian gives the word - suspecting Tran and remaining willfully ignorant that Dom is more likely behind it - but we find out that Tran is innocent. The truth becomes clear: Dom and his crew are behind the hijackings.

Brian confronts Dom about his "other dealings," under the guise that he wants in on them. Jesse loses his father's car to Tran in a big race and then runs away afterward; this leads to Jesse being killed in a drive-by shooting later on. Tran thinks Dom set the SWAT team on him, which puts the idea in Dom's head that there's an undercover cop in his team, something he suspected earlier when Brian was caught in his garage, even though Brian made up an excuse.

Brian tells Mia that he's a cop after Dom leaves to pull a dangerous job. Brian comes to the rescue to save Vince - finally earning his respect and approval. Brian blows his cover to everyone else by calling medical personnel to save Vince's life.

Brian chases after Dom the next day, since Brian is still a cop and Dom is his mark. They have an impromptu race, something that will become a staple in the series. Dom crashes, the car is totaled, but Dom is okay. Brian gives Dom his car, allowing Dom to escape from the police. Brian, too, walks away as the credits begin to roll, leaving his career as a police officer behind. A post-credits scene sees Dom driving around in Baja, Mexico.

It's a dumb and relatively shallow action movie that's more about the cars than any deeper themes. There are hints there - "it's not how you stand by your car; it's how you race your car," for instance - and the "importance of family" theme begins to show up, but these are only the beginnings of what the series would become. It has some decent racing and chase scene, but mostly ignores its characters and potentially interesting developments to focus on the cars - and it takes itself far too seriously. Unless you're a big fan of fast cars being driven reasonably well, it's not worth seeing.