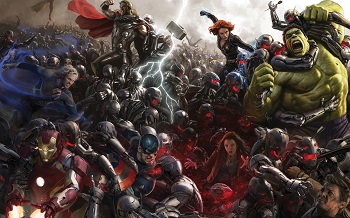 To be fair, the original Avengers wasn't a groundbreaking superhero story either. Its plot was fairly simple, basically acting as an excuse for Avengers to fight aliens in New York City. But everything in that film mattered. Every single plot element - from Loki's evil, to the Tesseract's threat, to the personalities of characters - was established in earlier films. The paper-thin story had merit because it added to a pre-existing foundation. And of course, the "Battle of New York" set the stage for all Marvel projects moving forward - it's even heavily referenced in Daredevil as the reason Wilson Fisk established his empire. Avengers was the perfect Phase 1 climax that proved audiences love grand narratives. Meanwhile, Age of Ultron took a step back to tell a mostly standalone story - missing the point of what made Avengers click.

Then again, standalone adventures aren't a bad thing - I love that Marvel's Cinematic Universe is big enough to dedicate an entire movie to an unstable AI without justifying his presence. But Age of Ultron wants it both ways, and awkwardly influences the universe with stuff that has nothing to do with Ultron. That's why Stellan Skarsgård shows up for two scenes and watches Thor swim in a magic spring. That's why Vision confuses the hell out of non-comic readers when he shows up in the film's final act. That's why Iron Man leaves the team while they construct a new base - setting up Civil War without actually explaining the team's shake-up.

Does that make Age of Ultron less fun? No. And perhaps Hulk's latest rampage and the destruction of Sokovia will have a direct impact on Civil War. But considering the Avengers are building a new base, I suspect Civil War will open with a clean slate and a new disaster that prompts government intervention. From all appearances, Agents of S.H.I.E.L.D. is laying a stronger Phase 3 foundation with its Inhumans and superpowers registry.

In other words, Age of Ultron wants to tie up Phase 2, lay the groundwork for Phase 3, and tell a standalone story about Ultron. By trying to do everything at once, it accomplished none of these goals. It still works as a popcorn movie, but will be quickly forgotten once Phase 3 arrives next year.