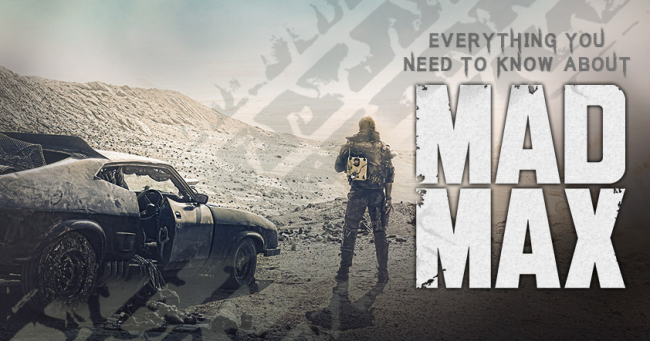 Mad Max: Fury Road marks the fourth installment in the Mad Max franchise, and with it being the first chapter in 30 years, it can be tough to remember all the important details that came before. Or, perhaps you haven't seen any of the previous films, but want to check out the new one. We've got you covered with this guide to the Mad Max series.

The movie that started it all, 1979's Mad Max grossed somewhere around $100 million worldwide on a budget of around 1/250th that number. The film served as an introduction to the character of Max Rockatansky, began to establish the post-apocalyptic world that future films would expand upon, and turned Mel Gibson into a leading man.

Max Rockatansky (Mel Gibson): Our leading character. A member of the MFP. Married to Jessie. Has a son, Sprog. Partner is Jim "Goose."

Toecutter (Hugh Keays-Byrne): The leader of the motorcycle gang the Acolytes. The film's villain.

Johnny the Boy (Tim Burns): A member of the Acolytes. The one who lights Goose on fire.

Mad Max is set in the near future after society has begun to crumble. Gangs and the police struggle for control in what is otherwise a relatively peaceful society. Max Rockatansky, a member of the newly formed Main Force Patrol (MFP) - the police - stops and kills an out-of-control member of the Acolytes, Nightrider. The gang, led by Toecutter, have been terrorizing a small town. After Max helps arrest another one of their members, and upon hearing of the death of Nightrider, the gang targets Max in order to get revenge.

They first target Goose, Max's partner on the force. They make him crash his vehicle and then light it on fire. Upon seeing Goose's body in the hospital, Max makes the decision to resign from the police force, claiming that he's close to losing his sanity and humanity. Fifi convinces him to first take a vacation before making that decision definite, which he takes with his wife and son.

It's during this vacation that the Acolytes further target Max, going after his family. Sprog is killed, and Jessie finds herself put in a near-death position. Max does, indeed, lose his humanity, and goes on a manhunt to put an end to the Acolytes once and for all - doing so with a suped-up police car that will return in the sequel. Bubba gets shot, he chases Toecutter - who gets run over by a semi-trailer truck - and he blows up Johnny, who beforehand calls him "mad," the nickname for which the film was named. Max, having lost all of his humanity, drives off into the wasteland, setting the stage for The Road Warrior.

Mad Max has very little plot. It has amateur actors in many of its roles. Looking at it in 2015, it often feels rudimentary. Despite all three of these things, it's a lot of fun. It provides some delectable supporting characters, instantly turns Mel Gibson into an action star, provides an interesting look into the future - we're not quite yet in a post-apocalyptic setting, but we're getting there - and it delivers some great action. Even with a limited budget, director George Miller - who would go on to helm or co-direct each future Mad Max film - packed the inaugural installment with a great deal of over-the-top action, showcasing creativity and insanity. Yes, Mad Max is good.