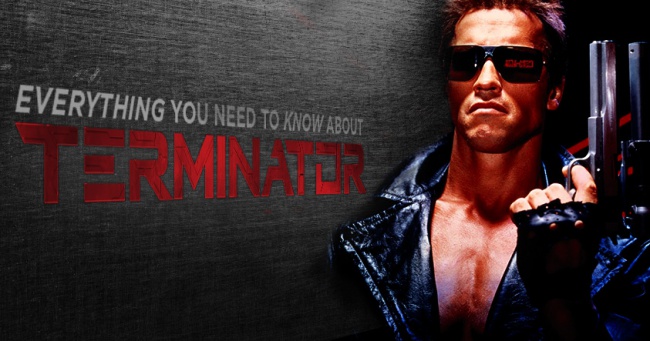 Terminator Genisys marks the fifth installment in the Terminator franchise, and it can be tough to remember all the important details that came before. Or, perhaps you haven't seen any of the previous films, but want to check out the new one. We've got you covered with this guide to the Terminator series.

Released in 1984 and directed by James Cameron, The Terminator kicked off the Terminator franchise, shot Arnold Schwarzenegger into superstardom - a path he was arguably already on following the two Conan movies - and spawned a franchise with multiple films and a television series, as well as several spinoff properties like video games and comic books. While the franchise's quality has deviated over the years, the first two films are classics that any film fan needs to see.

The Terminator/T-800 (Arnold Schwarzenegger): A robot sent back in time, disguised as a human, to assassinate Sarah Connor. The film's villain, later in the series becoming a hero.

Sarah Connor (Linda Hamilton): The protagonist. A woman who will eventually give birth to John Connor, who will lead the Resistance against the robots. Target of the Terminator.

Kyle Reese (Michael Biehn): A Resistance fighter sent back in time to protect Sarah Connor from the Terminator. Father of John Connor.

In 2029 A.D., humans have almost been eliminated after an event known as Judgment Day occurred. Machines have taken over the planet. The few humans remaining are known as The Resistance, and they are in a constant battle with the machines - which are under the control of a self-aware computer system called Skynet. The leader of the Resistance is a man named John Connor, born to Sarah Connor, who is currently living in 1984. The machines, unable to defeat John in the present, send a Terminator - a robot with a tissue-like external layer, resembling a human - back to 1984 to kill his mother. John sends back Kyle Reese in order to protect his mother.

Kyle and Sarah continue running from the Terminator for some time, always just managing to escape. The police wind up being no help. After one particularly close encounter, Kyle and Sarah have sex, conceiving the child who would eventually grow up to be John Connor. The Terminator finds them soon after and continues the chase. It apparently ends after an explosion which seems to shut down the Terminator, but it continues its pursuit as a one-armed torso. To finally put an end to the Terminator, Sarah leads it to a hydraulic press, which finally shuts it down for good. Kyle Reese dies during the chase. Some of the Terminator's body remains, and is gathered up by the police - leading to reverse engineering which speeds up Judgment Day.

Several months after, Sarah, now pregnant, roams the world, recording audio logs for John when he gets older.

It doesn't get much better than The Terminator as far as I'm concerned. I love everything about this movie. It offers us a fresh premise, gave us the best performance of Arnold Schwarzenegger's career - he was finally used properly - gave us a lot to think about, and was a ton of fun from start to finish. It was intriguing enough to make us want to see more, but didn't necessarily demand a sequel, even though even James Cameron probably didn't envision how big the franchise would become.