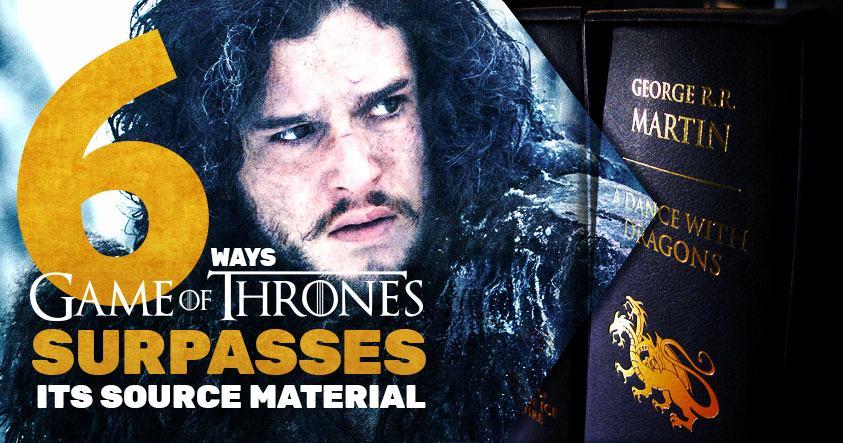 There are several problems with adapting a series of books into a movie or a TV-series, and too often such adaptations fall short of capturing the quality of the original source material. HBO's Game of Thrones, however, has managed to do what every good adaptation should: use its weaknesses to its advantage.

Though the books are much grander in scale, featuring immense amounts of history, characters and locations, the series cannot benefit from a similarly epic scope. Due to budgetary concerns, and in efforts to fit the story better into a TV-screen, the breadth of the story is much smaller - but also much more personal. The series has done a wonderful job during its five-season run to not only keep up with the quality of the source material, but also occasionally surpass it. Here are the six ways in which it manages to do just that.

One issue that often arises when creating a film based on a novel is that the pacing suffers. Game of Thrones has the advantage of dedicating ten episodes to each book, but keeping the story properly paced remains difficult. Surprisingly, the show has still been able to keep a steady, tight pace - one that is sometimes even better than the books.

Sure, there are important things in the books that have had to be cut out from the show, as is the deal with every adaptation, but trimming the story also gave the writers an ability to better rearrange the different plots. Bran's storyline, for example, has never really been able to grab my attention in the novels, and reading through those lengthy chapters has been a chore. The show, on the other hand, distributes each episode's runtime more evenly between the characters, so you never have to wait too long to return to a storyline that interest you.

However, it was when the series caught up with the fourth book, A Feast for Crows, that it managed to significantly tighten the storytelling. The book had been criticized for a lack of focus, as well as for lacking the most interesting characters of the story. The show took the opportunity to restructure the events of the fourth and fifth book, tying them closer together as well as starting to create its own, original storylines. Not everybody might've agreed with these changes, but they did end up improving the show's pacing significantly.