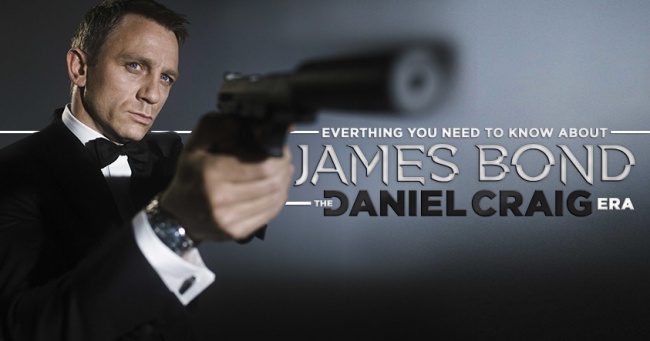 It was in 2005 that Daniel Craig was announced as the newest actor to play the iconic character of James Bond. "A blonde Bond?" was the response from many after the announcement. Craig was a relative unknown to American audiences, which certainly didn't help things, even though he'd been nominated for two British Independent Film Awards and was only a couple of months away from being a prominent player in a Steven Spielberg film. Audiences waited with bated breath in anticipation of Casino Royale, a reboot of the Bond franchise, only to have it wind up being one of the most critically well-received films of the franchise, as well as, at the time, the highest grossing of the series.

James Bond (Daniel Craig): Our leading character. Set at the beginning of his career, he earns his double-0 status at the start of the film and is tasked with taking down a terrorist financier, Le Chiffre.

M (Judi Dench): The head of MI6, she acts like a mother figure to Bond, although she's often hard on him. Returns in Quantum of Solace and Skyfall.

Vesper Lynd (Eva Green): A Treasury agent who watches Bond and determines whether or not he deserves additional funding. The Bond Girl.

Felix Leiter (Jeffrey Wright): A CIA operative Bond meets at a poker tournament who helps him here and in Quantum of Solace.

René Mathis (Giancarlo Giannini): One of Bond's contacts. He is based out of Montenegro. Returns in Quantum of Solace.

James Bond, an agent for MI6 - the British intelligence agency - is promoted to double-0 status after thwarting a plot from an agency traitor. He is then tasked with going to Madagascar to locate a bomb maker. He kills the bomb maker, though, discovering in the process a terrorist group and its financier, Le Chiffre. Le Chiffre invests the money of many of his terrorist clients into an airplane company, deciding to plan an attack on its newest prototype, causing its share prices to fall while he bets against the predicted growth, giving himself a substantial profit.

Bond heads to Miami to stop the terrorist plot. He does so by redirecting the planned fuel truck-to-airplane assault, and killing the henchman who was tasked with its execution. Le Chiffre loses his clients' money, and as such decides to organize a high-stakes poker tournament, which he believes he will win, to recoup his losses. Bond enters with the hope that Le Chiffre will become an aide for the British government in exchange for protection if Bond can defeat him. On the way to the tournament, Bond meets Vesper Lynd, a Treasury agent who gets to determine whether or not Bond can use a $5 million re-buy-in if he loses.

Bond does well in the tournament before taking a risk that sees him get eliminated. Vesper decides that he does not deserve the $5 million, causing Bond to be eliminated for good. Before anything else can happen, a fellow player named Felix Leiter approaches Bond, revealing himself to be a CIA agent. Felix gives Bond the $5 million to continue playing. Bond wins the tournament, even in spite of a failed assassination attempt, and deposits them into a Swiss bank account. Later on, Le Chiffre captures Bond and tortures him for the accounts password. He doesn't succeed, being interrupted by Mr. White, later revealed to be a representative for the terrorist organization Quantum, who kills Le Chiffre. Bond wakes up in a hospital, with Vesper, tells her he loves her, and resigns from MI6.

On a holiday in Venice, Bond learns that his money was never deposited into his bank account. Vesper has stolen it. He follows her into a rundown building, where he kills the men with whom she meets. The building begins to collapse, Vesper locks herself in a cage and drowns while the building sinks. Mr. White walks away with the money. Bond rejoins MI6 and vows revenge. He learns that Le Chiffre and Mr. White blackmailed Vesper into stealing the money in exchange for Bond's life. He also discovers where Mr. White lives, where he wounds and kidnaps the man as the film ends and sets up Quantum of Solace.

After a couple of lackluster Pierce Brosnan installments and a controversial casting choice in the form of Daniel Craig, audiences were a little worried about Casino Royale. A reboot of the franchise, this movie turned Bond away from the suave individuals of the past and made him into a gritty, realistic person - superhuman strength, durability, and incredible accuracy aside. A chase scene early on in the film would never have been possible in the years earlier, but with this rebooted Bond, it is. There are some great action scenes, the entire poker sequence is incredibly intense, and you begin to care about Bond, Vesper, and the relationship between the two. Daniel Craig silenced critics with this movie, leading one of the best Bond films of all time in just his first outing.