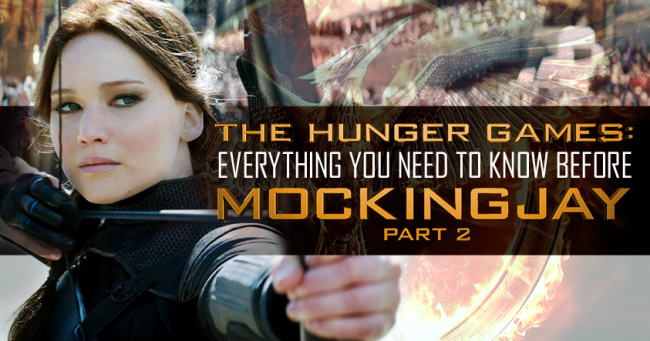 The Hunger Games: Mockingjay - Part 2 marks the fourth installment in the Hunger Games franchise, and it can be tough to remember all the important details that came before. Or, perhaps you haven't seen any of the previous films, but want to check out the new one. We've got you covered with this guide to The Hunger Games.

The Hunger Games is a novel written by Suzanne Collins that spawned an entire franchise, cashed in on the current trend of adapting young adult novels into feature-length films - particularly those aimed at teenage girls - and gave those who can't help themselves a childish way to make fun of another protagonist's name. The first novel was published in 2008, and its movie adaptation was released in 2012 to relatively strong reviews and a boatload of money. Unlike some of its contemporaries, like Beautiful Creatures and The Mortal Instruments, we're getting to see it through to the end. The plug has not been pulled, and the entire franchise has been adapted into movies.

Katniss Everdeen (Jennifer Lawrence): The film's protagonist. She volunteers to participate in the annual Hunger Games, taking the place of her sister, Primrose, who is chosen as District 12's tribute. It is there where she must fight for survival. Remains our protagonist throughout the series.

Peeta Mellark (Josh Hutcherson): The male tribute from District 12. Becomes love interest to Katniss, and her ally in the Hunger Games.

Gale Hawthorne (Liam Hemsworth): Katniss' best friend in District 12. Stays behind and watches her compete in the Hunger Games.

Caesar Flickerman (Stanley Tucci): The Master of Ceremonies and commentator for the Hunger Games.

President Coriolanus Snow (Donald Sutherland): The ruler of Panem and the Capitol. The series' antagonist.

The land of Panem is split into 12 Districts and the Capitol. Every year, the Capitol chooses two members of each District - one male, one female - under the age of 18 to fight in an event called "the Hunger Games," the winner of which is given food, supplies, and riches, a big deal, as each of the Districts is in a state of poverty. The Hunger Games - a fight to the death - are held with the idea of keeping the Districts in check, as well as provide entertainment to those living in the Capitol.

Primrose Everdeen is selected as the tribute for District 12 but is replaced by her sister, Katniss, after she volunteers. Peeta Mellark is selected as the male tribute. They head on a train toward the Capitol, accompanied by their chaperone, Effie, and their mentor, Haymitch. At the Capitol, they train, are told of the importance of getting the public on their side in order to get sponsors who will send them items during the Hunger Games, and they are given odds on their chance of surviving.

The Hunger Games begin, and a good number of combatants are killed right off the bat. Katniss survives on her own, while Peeta joins up with some highly favored contestants. Over the course of the games, she kills a few people but mostly survives by hiding and running. Along the way, a girl named Rue saves her life, and they team up for a brief while. Rue winds up dead, though, which stirs not just Katniss but many of the viewing public.

Peeta and Katniss eventually team up and pretend to fall in love to draw sympathy. The final three survivors meet, and Peeta and Katniss kill the third after throwing him to some dogs, which Gamemaker Crane unleashed to speed things along. Katniss and Peeta were at one point told they would both be allowed to win, since they're from the same District, but those rules get changed as soon as they become the final two survivors. In an act of defiance, they decide to both eat poisonous berries, so nobody wins. The previous rule is reinstated, and they are declared co-winners. President Snow, displeased with both the result and the act of defiance, sends Crane to his death and begins to think of a way to punish Katniss and Peeta.

Despite the obvious similarities to Battle Royale, The Hunger Games is still a good movie. It has a strong emotional involvement, is pretty exciting, does a good enough job at establishing its dystopic sci-fi society, and shows us teenagers killing other teenagers, something not seen often in movies - let alone in PG-13 movies. However, because of that PG-13 rating and some poor filmmaking choices, most of the action is obscured by choppy editing and shaky camerawork. It still ultimately works, but it's hampered by some poor decisions.