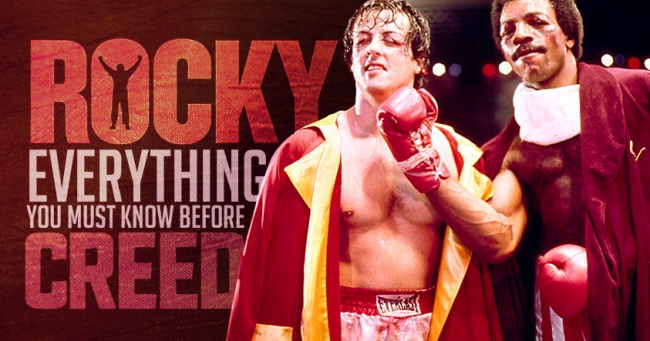 Rocky is one of the most enduring characters in all of cinema - if not all of sport. Starting in 1976, the character has been around nearly four decades at this point, and is as synonymous with the name "Sylvester Stallone" as "Rambo" or "mumbling." With him now appearing in his seventh film, and already having been the lead in six, the character is the most well-known boxing character in cinema history. With Creed coming out this week, it's time to take a look back at the history of Rocky, and either remind or catch up viewers on what happened in the earlier films.

Rocky Balboa (Sylvester Stallone): A loan shark enforcer and semi-pro boxer who is given an unlikely shot at the World Heavyweight Championship.

Rocky Balboa is going nowhere in life. Despite making a bit of money boxing, and working as an enforcer for a local loan shark, he's drifting through. However, he's about to be given the shot of a lifetime when the opponent for World Heavyweight Champion, Apollo Creed, is unable to compete. Creed decides to give an unknown a shot at the title. Rocky is the one on whom he decides.

Rocky then has to train harder than he ever has before. When not training, he begins to date Adrian and befriends her brother, Paulie. Rocky does not believe he can win the fight, but will be content to not be knocked out. After weeks of training, the New Year's Day boxing match begins.

The match goes better for Rocky than anyone - including himself - expected. He not only survives in the first few rounds but is dominant. Creed learns from this and starts taking the fight more seriously. As it progresses, it becomes a fight of skill vs. guts. The match goes the distance, ending after 15 rounds of hard-fought action. Creed wins by split decision, but Rocky captured the hearts of the audience and gained some self-respect and dignity for himself.

Rocky is one of the boxing movies of all time, which is kind of funny as, looking at it in retrospect, its boxing scenes aren't actually that good. A limited budget and the 1976 release date couldn't have helped these. It's also incredibly hokey at times, especially in the cynical times in which we live. In spite of this, it tells a compelling underdog story that thankfully doesn't end with a complete victory for its hero; it instead finds a moral victory at its core, something arguably more important. Sylvester Stallone, who also wrote the film, turns in what's probably the best performance of his career. It's not the best boxing movie ever, but it may be the most iconic.