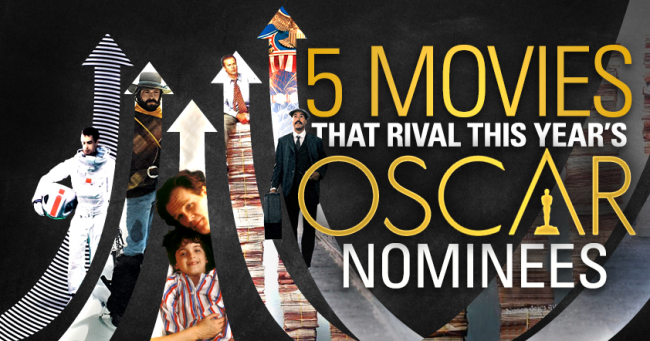 The Oscar telecast right around the corner, and this year's race for Best Picture is shaping up to be one of the most unpredictable in years. Pundits have whittled the contest down to a three-horse race between Alejandro Gonzalez Inarritu's epic The Revenant (which nettedInarritu the DGA award), Tom McCarthy's docudrama Spotlight (which took home the ensemble prize at the SAG awards), and Adam McKay's comic The Big Short (which took top honors at the PGA awards).

There is also room for an upset this year (Mad Max: Fury Road, anyone?) which ups the ante even more.

This year's crop of Best Picture nominees make for a solid group of contenders despite the usual array of snubs (Carol, Straight Outta Compton, Ex Machina, Sicario) which just proves that 2015 was a great year for film.

If you've seen the nominees this year and crave similar experiences, here are five films that share DNA with the nominees. Each of these films, some little seen gems that got zero awards love, are well worth your time!

Duncan Jones (son of the late David Bowie) made an impressive directorial debut with this offbeat sci-fi drama anchored by one of Sam Rockwell's finest performances. He plays Sam Bell, a space miner wrapping up a gig on Earth's natural satellite, which has become an important source for alternate fuels in the future, when strange things begin to happen and his journey home becomes less and less guaranteed. While Moon shares the same DNA as Ridley Scott's Best Picture nominee The Martian (astronaut trapped alone on a desolate place), this film actually goes a few steps further by literally being a one-man show. Save for some interludes with Bell's family via FaceTime and his AI companion, GERTY (voiced by Kevin Spacey), Moon is a literal one-man show. As the film's twisty plot gains steam, Rockwell remains a force to be reckoned with and gives Moon a surprising emotional heft. Kudos should also be given to Jones for utilizing practical effects such as models in lieu of CGI while making the most of a $5 million budget.