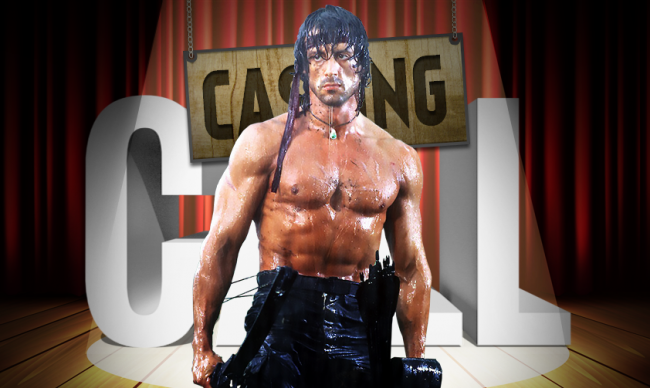 Sylvester Stallone is 69 years old. You got that? Sixty-nine is like mandatory retirement age, and that's a fitting analogy because Stallone has just handed over the headlining slot of the Rocky franchise to Michael B. Jordan's Adonis Creed. If you haven't seen Creed yet, I recommend it highly. But with all the news about Stallone using his old hero roles as mentor characters for the next generation, it has broken recently that this might be happening with his other big one: John Rambo.

A few months ago, Stallone announced that he was (of course) writing, directing, and starring in a fifth and ostensibly final Rambo movie entitled Last Blood. But as recently as last week, that film has reportedly been put on the back burner in favor of a television series at Fox. How does that work? Well, it supposedly centers on the relationship between John Rambo, the PTSD-riddled Vietnam vet from those movies, and his son J.R. who is an ex-Navy SEAL.

I have no idea what they would do on that show. Would it be like an action show where the Rambo boys are called in to go on missions? Or would it be a more dramatic thing where they are dealing with the ramifications of war? Either way, it's unclear if Stallone himself will be the elder Rambo on television or if he will pass the role to someone else. Presumably either way this J.R. character seems like he may be the center of the series. So, who would be playing Rambo Jr. and handling the majority of the heavy lifting, dramatically or physically?

I really don't think this fellow would be on a network television show as Son of Rambo. But Stallone really thinks this is possible, as his recent comments have pointed out. So, let me take one slot on the list to say this: yes, if you were to do a full reboot of First Blood, the drama-driven first film about the unhinged Vietnam vet battling small-town police (and have it directed by Gosling's collaborator Nicholas Winding Refn) this could work. Gosling's best work, 2011's Drive, involved freaky fight sequences, minimal dialogue, and at the very least his ability to look single-minded or haunted. It would work.

Of course, it wouldn't even be a discussion if we're talking about a TV series or this Last Blood finale project. Who would buy Gosling as Stallone's son? Who would possibly think he would do a Fox television project? And who would have the gall to take his existing CV and conclude that his next project should be something with very little acting involved? Stallone... and no one else.