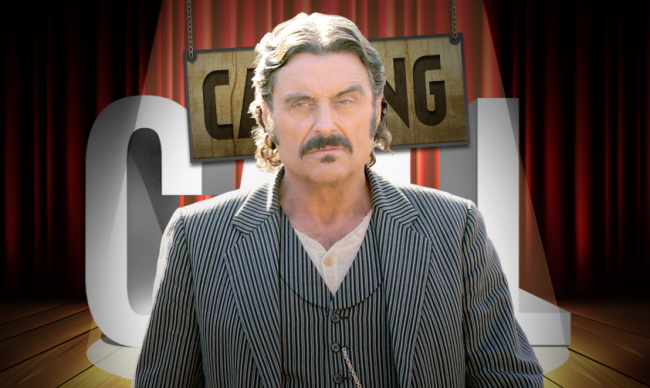 David Milch created a very strange and wonderful pocket universe with his HBO show "Deadwood," comprised of lofty, profane backwards-Shakespeare dialogue, grimy revisionist portrayals of western legends, and an overarching theme of community in a time and place where such a thing was viewed as naive at best. Sadly, the show was cut down in its prime with no proper ending after three seasons. In some way, the lack of a proper ending and the disappointment and emptiness it created for fans was a retroactive meditation on what endings really are.

But now, all of that can be thrown off the balcony of the Gem Saloon into manure. Reports suggest that a Deadwood movie might be happening, either theatrically or directly on HBO (where such a thing as "Deadwood" is a lot more viable as a streaming option than it was as appointment television in 2006). Not only is this great for fans, it's great for anyone with a familiarity with the historical material that the show tackles, as the show unfortunately missed several key characters and events from the strange days that turned the outlaw mining camp into a proper fixture of society in the Black Hills of South Dakota.

Naturally, all the fan favorite actors are hoped to return. Ian McShane's slimy/regal Al Swearengen, Timothy Olyphant's earnest and sanctimonious Seth Bullock, Robin Weigert's sewer-mouthed Calamity Jane... this article would be an extra 1,000 words if every essential actor and character were listed. These people - the real thespians and their on-screen personas - simply are "Deadwood." But who should join them, and who would they play? The show was a bastion of remarkable late-in-the-game additions like Brian Cox and Gerald McRaney, and there's plenty of room for more.

The real-life Romans is credited with bringing Edison's patented electricity to Deadwood, along with being an arguably very myopic man of the law. And if there's anything Al, Cy Tolliver, and the rest of Deadwood's criminal elite have learned it is that big business is terrible for their small businesses, as is law and order. Romans could take the form of a comical faux-authority much like the Yankton commissioner Jarry before, or he could be a vague menace that reveals himself as much dirtier and more despicable than even George Hearst. Or both, even.

Either way, Nick Searcy is the perfect man for the job. Well known for his role as Art on "Justified," his homespun glib wisdom has always belied what Rooster Cogburn had: true grit. Searcy knows how to have fun at his own expense, so he could easily play a subject of disdain or ridicule. But he also has a Carolina twang in his voice and a glint of steel in his eye that says, "I haven't done this in a real long time, but I'm thinking about kicking yer ass." Perfect fit for "Deadwood," I say.