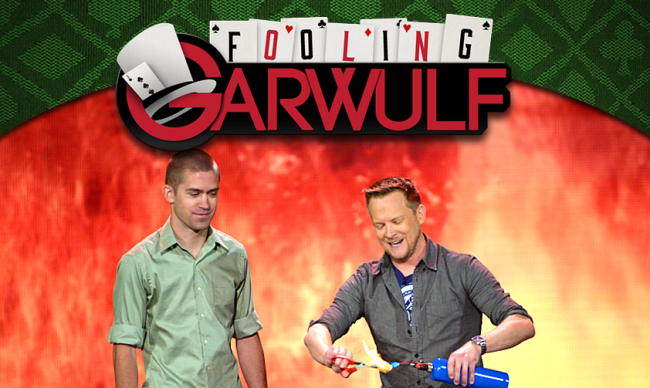 Editor's note: come for the episode recap; stay for the wonderful insight into the world of magic (starting on page 2!)

Following the amazing performances of the previous two episodes, last night's Penn & Teller: Fool Us was, strangely enough, a bit disappointing - but this was mainly because last night's episode was only full of good, solid routines, with nobody quite reaching the heights of the sublime that we saw with Jon Armstrong or Shin Lim. So, without further ado, the performances:

Brian Brushwood: This was a fun, energetic act, and possibly the most lively routine of the night. Rather than just have an audience surrogate, Brushwood brought the entire audience into the trick as participants, which is really great. On a personal note, it was very satisfying to see psychic surgery, a scam that has fooled so many people into jeopardizing their health by seeking a miracle cure, presented in its rightful context as a magic trick. It didn't fool Penn and Teller, but it was good, solid entertainment.

(Brian Brushwood once had a correspondence with Teller, which I think should be required reading for anybody getting into magic who is trying to figure out their identity as a magician.)

Simon Pierro: This was easily the stand-out performance of the night. It's not often that you get to see what is essentially a new field of magic performed before your eyes, and when you do, it's really special. I don't know if the magic app salesman was the best way to present digital magic, but it was amazing and wonderful to see it. It didn't fool Penn and Teller, but it did fool and amaze me.

John "Handsome Jack" Lovick: This was a solid but low key performance of a classic trick. It's also a good example of escalation and misdirection in presentation. Lovick looks like he's finished the trick and is in the process of exposing it, and by the time you realize that it's a fake-out, he's set up the climax - which happens to be an impossible act that undermines the exposure and makes the trick more baffling. This technique worked - Lovick was the only performer of the night who fooled Penn and Teller.

Kyle Knight and Mistie: This had to have been the most charming act of the night. It's a combination of an escape and a quick change effect that doesn't present any thrill of danger to the audience - just a lovely sense of mystery. It didn't fool Penn and Teller, but it's a fun trick performed by people who clearly love what they're doing, and that's part of what makes magic worth it in the first place.

Penn & Teller: The double bullet catch, which they perform every night in their Vegas show, may be the most remarkable and exceptional trick in the whole of magic - not just because it is incredibly deceptive, but because it may be the first safe bullet catch in history. The bullet catch is the most dangerous illusion in the entirety of magic, claiming the lives of at least 15 performers. One of the few magicians before them to make it a regular part of his act, William Robinson (1861-1918) - better known by his stage name of Chung Ling Soo - died after being shot while doing the trick, and Robinson had been paranoid about safety. The bullet catch is dangerous for the magician, and potentially dangerous for the audience.

Related to:
robert b. markshoudinimagicmovies and tvpenn and teller
0
Tweet