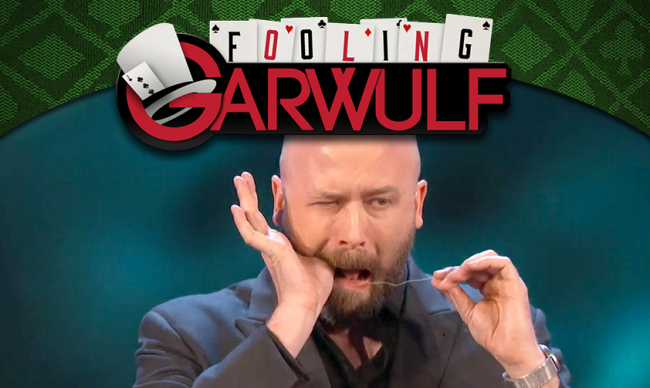 Another week, and another solid episode of Penn & Teller: Fool Us. So, without further ado, onto the performers:

Bill Cook: The Invisible Deck is a classic trick, involving a card freely selected by a volunteer, and the performer pulling a real deck out of their pocket with the selected card turned face up. Cook's version was a better presentation - it cut directly to the predicted card in a way that had more follow-through on the theme of invisible objects. The different style of climax also has the merit of throwing off any familiarity with the method for those magicians who are watching. It may not have been enough to fool Penn and Teller, but it was a good presentation all the same, and a joy to watch.

Wes Barker: It would not surprise me to discover that Barker has spent a lot of time busking. This was a busker's performance style through and through, keeping the audience engaged by continually bringing new and entertaining elements into the trick (a vital thing when one is attempting to attract passers-by on a street corner). Barker also provided a near-perfect example of how to fool a magician - you take an effect with a known method, and perform it with a different one. Barker's method looked like a force, smelled like a force, and to a magician the revelation that it was not a force was jaw dropping. He did provide a bit of a verbal flash, though - open any book somewhere in the middle and take a look at the page numbers, and you'll find one of the keys to his trick (I can't take credit for noticing this - that has to go to IMDB forum member hoosiersfan2011). Either way, it fooled Penn and Teller, and it was the standout performance of the night...for magicians, that is.

Matt Holtzclaw: This performance had two tricks, and we'll deal with them separately. The first is a version of the Hindu Thread, which is indeed a beautiful effect. Unfortunately, this time it was a bit of a missed opportunity - by presenting only the effect, Holtzclaw missed out on highlighting the themes the trick presents of unity and separation, and of pain and healing. So, it was beautiful, but it could have been so much more so. To get an idea of what it could look like, watch one of Eugene Burger's presentations of the trick. The second effect is something we haven't seen much on Fool Us this year: a carnival-style act. It is a magic trick that looks like a stunt. It is also a great presentation that, through no fault of the performer, is betrayed by the HD camera, which revealed more than it should have. Performed live, it would have been amazing. Holtzclaw didn't fool Penn and Teller, but it was a solid performance overall.

David Regal: For the first time this season, the title of standout trick of the night has to be shared. Barker may have been the best trick for magicians, but Regal has the best performance for lay audiences. He was energetic, funny, and fun. He also managed to take the idea of selecting a card and turn it on its head so that you didn't know what was coming next. He wasn't a fooler, but that doesn't matter - he was still great.

Penn and Teller: If I had to identify my favourite presentation of the cups and balls, it would be a tie between Ricky Jay and Penn & Teller. It speaks volumes about the duo's skill, along with the power of the trick itself, that they can do it with clear plastic cups, narrate and show you every single action, and it's still almost impossible to see the sleights. It is also evidence, if any is still needed, that the true magic lies in the performer instead of the method. I do have one criticism, though - I've now seen them perform it with a finale involving a lime, a potato, and a baseball, and the potato really was the best one. The baseball lacks the contrast in both shape and colour of the potato, and isn't the best way to finish up. But it's also a classic trick, well done, that everybody knows and is comfortable with... and that brings me to the subject of this week's commentary.