Penn and Teller: This was a classic routine of theirs, and perhaps one of the best presentations I've ever seen of the principles of magic. I'd go as far as to call it an education for anybody who wants to know how magic works. If I have any criticism, it is that it should have been in the season premiere, as it sets the stage for every magic trick that follows. And this wonderful presentation of the inner workings of magic brings me to this week's commentary.

Most of magic doesn't happen in the hands of the magician. Instead, it happens in the brain of the audience.

The human brain is a remarkable computer - not only must it operate your automatic and basic motor functions, but it also handles higher reasoning. And, it does all of this on only 20 watts of power (to put that into perspective, a light bulb uses more). When you look around, your eyes - each the equivalent of a 1 megapixel camera - take in a vast amount of data that the brain then has to process. So, how does it process all of this information on only 20 watts?

The answer is simple: it doesn't. And this is something that magicians rely upon.

It is literally impossible for the human brain to process everything the senses take in. Instead, it takes a number of short cuts, most of which involve cherry-picking the most important elements of what you see, hear, smell and feel, and filling in the rest on the fly. This is how we perceive the world, and what allows us to do things like focus on a single conversation in a crowded room, or pick up on various hazards while driving without being distracted by the texture of the road. 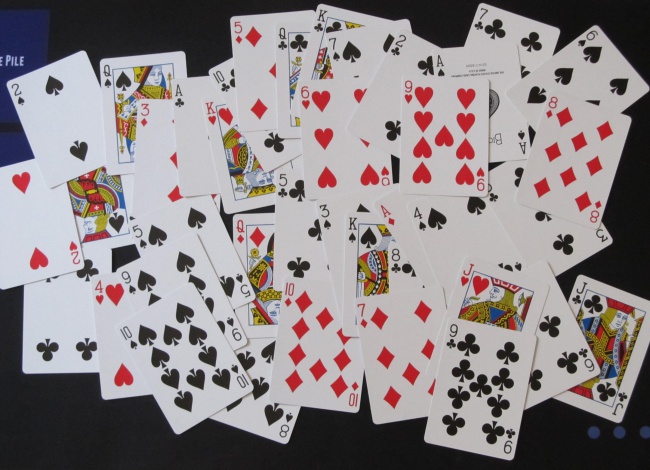 For example, take a look at the photo above. In this picture, I've spread out a deck of cards. If I was performing a trick, I would then ask you to pick a colour - red or black. I would then use the magician's choice technique to justify making half of the red cards disappear from the deck.

In fact, I'm going to do that right now. Go ahead and count the red cards in the picture - there's only thirteen of them. I've made the rest disappear.

Well, that's the magician in me talking. In actuality, there were never more than thirteen red cards there. I selected the cards carefully - there are hearts and diamonds in the face and common cards, and none of the values are missing. When your brain saw that, because it had no reason to look any further, it just assumed that all of the cards were accounted for, even though there are twice as many black cards as red cards.

Magicians use these assumptions for their tricks all the time. One of the most famous card tricks in magic is called the Ambitious Card, where a card rises again and again to the top of the deck. Most of the time, if you see an action repeated, the cause and effect remain the same - this is something your brain counts on so that it can fill things in. In the Ambitious Card, every single stage tends to use a different method. Because your brain tries to interpret repeated actions as the same cause and effect, this prevents it being able to interpret what is happening correctly. In the case of a slip-up, you might see one of the sleights - but since the next step will use a different one, your brain will discount the evidence it has seen, since it doesn't fit into the pattern it was trying to create.