In many ways, Vernon revolutionized and even created modern close-up magic. But Vernon did not turn to magicians to learn most of his craft, although he certainly did learn some magic from other magicians. Instead, he went to where the real close-up magic was happening in the early 20th century: the card table. Vernon's magic "Bible" was no mere book on tricks for performers - it was S.W. Erdnase's The Expert at the Card Table, a treatise published in 1902 on the art of cheating at cards that has been considered the Bible of card handling, and remained in print, ever since. 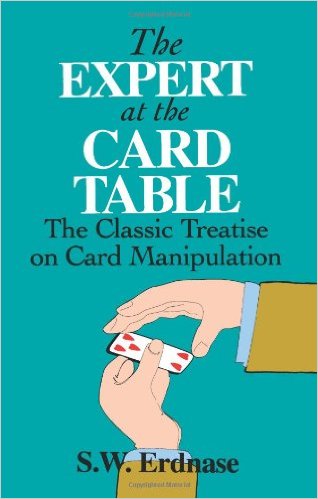 The Expert at the Card Table is a remarkable book, and at the heart of one of the most enduring mysteries in magic - nobody knows who Erdnase was. For some time it was thought that he was a card cheat named Milton Franklin Andrews, who died in a murder-suicide in 1905. This theory seemed solid until a picture of Andrews was shown to the book's illustrator, Marshall D. Smith, who had met the author... and had never seen Andrews before in his life. Magic historians seek the identity of Erdnase to this day.

Regardless of who wrote it, the first half of The Expert at the Card Table is a practical manual for cheating at cards, with detailed instructions on everything a card cheat would need to gain advantage during a game. The second half is an instructional manual for magic sleights, along with some tricks. This dual identity has fuelled another debate - that of whether it was a book written for cheaters with some magic thrown in, or a magic book masquerading as a manual for card sharps (also known as "card sharks").

For the young Dai Vernon, who acquired the book in one of its first printings, it was a revelation. Unlike a magician, a card sharp has to perform his sleights under risk to life and limb. This means that every single move he makes has to look natural, to the point that dealing from both the top and bottom of the deck must appear identical. This naturalness was a key point preached by Erdnase, and a stark contrast to the flashy style magicians had developed. Applied to magic, it would make an effect seem even more magical, as it would appear that the performer had done nothing out of the ordinary. Vernon memorized the book and became Erdnase's apostle to the magic world.

Magicians and card sharps have long had a love-hate relationship. Particularly after the creation of Vernon's Inner Circle, magicians were hungry for anything a card sharp could teach them. However, they also had a disdain for how card sharps earned their living, and were quick to incorporate exposés of how gamblers cheat at cards into their acts, or set themselves up as anti-cheating consultants such as Mickey MacDougall (1902-1996), who billed himself as "The Card Detective," and John Scarne (1903-1985). This meant that while magicians were eager to track down and learn from the card sharps, the card sharps - who thought that magicians were idiots for wasting their sleight of hand skills on card tricks - were considerably less eager to talk to the magicians.