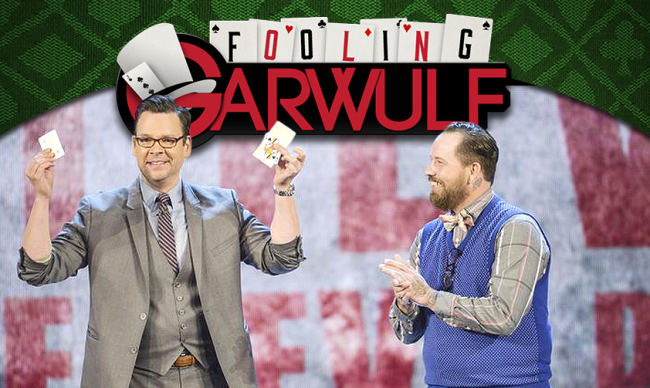 The season finale of Penn & Teller: Fool Us aired last night, and thus we come to the final installment of Fooling Garwulf... at least for now. So - as usual - without further ado, onto the performers:

Derek Hughes: This was a nice routine that began with a transformation of one card into another, known in magic as a "colour change," and escalated into a prediction that played with the idea of whether or not we have free will. It was an energetic performance, which, to be fair, felt a bit forced in one or two places, and there may have been a bit of flash in the second half of the trick during a shuffle. But, I still liked it, and I liked the subtext, even if it didn't fool Penn and Teller.

Reuben Moreland: "Matrix" is a classic trick, with coins moving magically from one corner to another. Moreland's version, with dice appearing and disappearing under the cards as the cards fell to the table as the dice disappeared, was simply amazing. Further, he managed to capture the essence of a kid playing with a magic toy box in a performance that was whimsical, playful, inventive, and, most of all, magical. Moreland may not have fooled Penn and Teller, but he took the best performance of the night with ease.

Suzanne: My readers may remember Suzanne as one of the magicians interviewed for the women in magic commentary of Fooling Garwulf #3. Her band-aid trick was one I had heard about while researching that installment, and I was delighted to see it performed. It is a heartwarming trick, channelling the experience of being comforted by a loving mother after a cut or scrape. This left Suzanne's routine of transposing writing from one band-aid to another - moving the love from Mom to the "owie" - both baffling and emotionally charged, in all the right ways... and she even managed to fool Penn and Teller.

Jared Kopf: What stands out the most in this performance was his stage presence. Kopf was confident, mysterious, and magical - perfect for a magician supposedly wrapping random chance around his little finger. And, while his routine - coming to a predicted result through a supposedly random set of selections - is a type I've seen a number of times before, I really liked how he worked the question of to what degree random events affect our lives into his performance. Kopf didn't fool Penn and Teller, but it was a great routine all the same.

Penn and Teller: This was an interesting little trick, with an egg being broken into its component parts and restored. Truthfully, I'm not quite sure what else to say about Penn and Teller's "One Minute Egg" - it was playful and a bit whimsical, but for the final Penn and Teller trick of the season, it felt underwhelming. Perhaps the tamed ball, the bullet catch, or "Shadows" would have been a better illusion to end on.

Normally I'd segue into the commentary at this point, but this is the season finale, and so there's one last thing to do... it's time to talk about the best and most outstanding performances of the entire season.