Even the manliest of men cry at the movies, though they might not admit it.

Hey guys, Dan Epstein from No Right Answer here. It's hard to label a movie as "Manly" without feeling exclusionary toward female movie goers. I'm not saying "Manly" means only guys can enjoy them, but from a marketing perspective they've been geared towards the male demographic. Ask MovieBob to go in depth on that one; I'll let him get the hate mail. Women can fully enjoy "Manly" movies, and in fact my wife has seen and enjoyed far more Rocky and Bond movies than I. I am reminded of this constantly.

That being said, the diehard hopeless fanatics of "Manly" movies will ridicule lovers of "Romantic Comedies" and the like, questioning why fans would want to cry. "There's no explosions," they scoff, chugging Mountain Dew and pouring saline in their eyes after a seventeen-hour Call of Duty marathon, "How can you watch such flowery stuff when there are REAL movies to watch?" Well I've got a secret that someone's paid me off to reveal (see Greg Tito): There's crying in "Manly" movies too. Quite a lot, I'm afraid. Below is a compiled list of the top five, and we're going to dish some dirt on what Mr. (or Ms.) Macho is really doing with all those wadded up tissues. Ok, probably not the best metaphor. 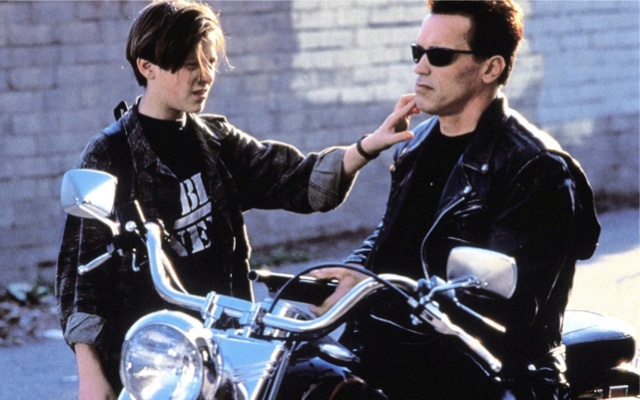 1. Terminator 2: Judgment Day
I apologize for the whiplash you all just suffered, throwing your collective heads back in a chorus of "OF COURSE!" My lawyers inform me you have no grounds for lawsuits, sorry. This is not just a movie about time travel and murdering robots. This is the SEQUEL to a movie about time travel and murdering robots! That means we as movie goers have only to watch the first installment to get a sense of what we're in for. Murder, murder, time travel, murder, sex scene (natch), murder, explosion, killer theme song. This is not conventional Valentine's Day material here.

This movie has all the boxes checked off for a great "Manly" movie. The heroes crack wise with each other, they escape guns and explosions, mom Sarah Conner is rescued, and still to this day I'm confused as to whether I'm attracted to or frightened by her. Nowhere in this film do we expect to care for the cannon-fodder that is strewn across the screen. Sure, John's foster parents were killed, but he hated them anyways and by extension so did we. Sure, Sarah's pleas to the psych warden to see her son were ignored, but then she stabbed him with a needle, so it's all good! (Kyle's Edit: The Escapist does not endorse the deaths of foster parents or the stabbing of psych wardens.)

Then James Cameron comes along, cracks his knuckles, and gives us what can only be short-handed as "The Thumbs-up Scene." Again, no whiplash-related lawsuits will be accepted. We spend the run-time of the movie witnessing robo-Austrian from the first film becoming not only a good guy, but a surrogate father to the whiney John Connor. They fix a truck together and talk about John's crappy surrogate fathers over the years, and why it's human to cry, and just have a genuine father-son moment. If one of them wasn't a robot assassin from the future, this would be an Oscar-bait premise.

Then the bomb drops. No, not the judgment day bomb, that was earlier in the film in a dream sequence. I mean the drama-bomb. (Kyle's Edit: That was my nickname in high school.) Robo-dad says that the only way to stop two more horrible Terminator movies from being made is for him to take a lava-bath. WHAT? Fathers everywhere tense up, thinking about what they would do to protect their kids. Kids everywhere tense up, thinking about how they will miss their Dads when they're gone. Really young kids tense up because this is a Rated-R movie and they might be caught. OH, what's that? He can't self-terminate and Sarah has to kill him?! WTF Cameron?! That's some heavy stuff right there.

And as Cyborg-papa is melting and feeling what can gently be called "supernova-level agony," he uses the last of his sentient capabilities to give John a thumbs-up, which the boy taught him earlier in an attempt to teach him human-ese. Holy hell, he gives John a thumbs-up. A final acknowledgment that he was listening, he learned, their time together was valuable to him, even in the face of his own destruction. Why are my eyes leaking?