The movie that made Bruce Willis an action star also made us reach for the tissues.

A lot has been stirred up recently about gender roles and their place in modern society. Clearly this article has been deemed THE most important soap box to speak about such matters...why else would the Escapist give me a weekly spot? Firmly establishing that "Guy" movies, "Manly" movies, and "Penis" movies (the non-porn variety) can be enjoyed by both sexes yet are marketed towards the Y chromosome persuasion, I want this article to not only titillate your collective funny-bone, but also fondle your heart. It is my submission that in finding and dissecting the emotional cores of these macho films, we can lay to rest the more harmful notions that men are only "true men" if they bury their feelings. And as a bonus, those in the mood for a "tear-jerker" might find that Predator is just as viable an option as The Notebook. But probably not, because that shit is SAAAAAD.

And the lights dim, and the crowd goes silent... 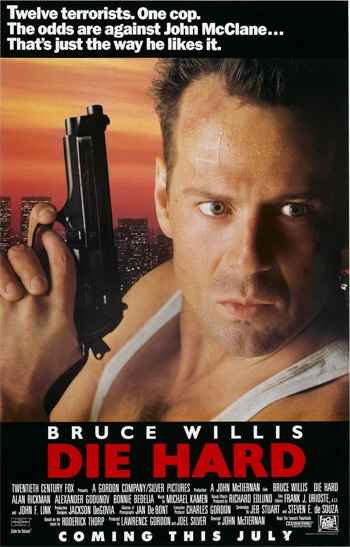 Die Hard
This movie holds a special place in many guys' hearts. Partially because it's an excellent action movie with the "every man finds himself in a situation of being a hero and steps up to the plate" trope in full force, but also because the plot happens during the holidays and someone says "Ho-ho-ho." This allows it to be rolled out like so much eggnog every year in the colder months, year after year. Families get together to play the "How long will it take to remember we hate each other" game (Kyle's Edit: New, from Milton-Bradley), and when a winner is crowned, Die Hard is a welcome distraction. Thusly, many have grown up with Die Hard not just as a beloved film, but a holiday institution. Hey, I may be Jewish, but even I know to watch this and A Christmas Story every year, or else TBS will come to my house and throw ham at me.

The more manly portion of the film is delivered via a thick layer of Bruce "Did that man ever have hair?" Willis. This movie cemented him as an action star, mostly by giving us the image of glass shards in his bare feet. That's the most hardcore. As hard as it is to believe, prior to this film, Brucey (Actually that's my personal nickname for Bruce Campbell, better not confuse the two) was best known as a TV comedy star in "Moonlighting." As Earth-is-flat backwards as it seems to modern audiences, no one thought this funny guy could do serious action. Before offering him the role they went through plans A through Y of their wheelhouse, including (but not limited to) Frank Sinatra and Arnold Schwarzenegger. I'd ask you to read those names again but I think I get paid by the word, so I'll repeat them: Frank Sinatra and Arnold Schwarzenegger. A world where "Yippee ki-yay, Mother F-er" was vomited out of the over-steroided mouth of Arnold (nothin' but love, Arnie!) is a world I don't want to live in. Luckily he turned it down, and apparently Sinatra was too busy perfecting a new kind of liquor made from distilled hookers.