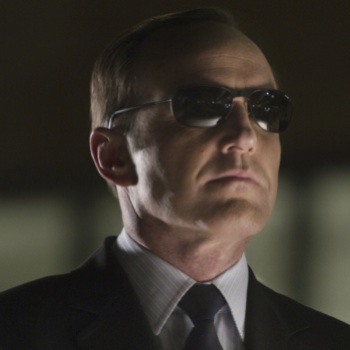 Like a magician, Joss "Firefly" Whedon works these complicated dominoes regarding Iron Man as misdirection so we don't consider anyone else getting the axe. The film starts with Tony having a fulfilling relationship with Pepper, too... a sure sign he's gonna get the axe. Then Captain Torch starts yelling at Tony that he's not self-sacrificing enough. "Foreshadowing?" we thought, as Mr. Dollhouse licked his lips. Finally Tony's friend, Agent Coulson, the man who was there from the beginning, was killed by...wait...what?

For those of you who've seen the gag reel of The Avengers, you know what I mean when I yell "Coulson! You were the finest man I've ever known!" The whole time we thought Iron Recovering Addict was going to bite the big one, no one ever considered it would be one of the background characters, mostly because we didn't realize how much one of those background characters meant to us. Phil "I have a TV show now" Coulson is an everyman. He's got no powers, no training other than bureaucratic that we were shown, and he wasn't even the leading "Normie" character. But between his comments about having a girlfriend in Portland (That's where I live. Am I his girlfriend? I thought I was a boy?) and his collection of The Human America trading cards, we identified with him the most. He's a fanboy who somehow got on the fun side of the movie screen. He gets the honor of not only dying at the direct hands of the main villain, but getting an awesome last shot off and a one-liner. That's how you do it, Coulson! (Here come the tears...)

Men who fancied themselves akin to the superheroes wept with those same heroes as Coulson was mourned. Men who identified with Coulson were rocked to the core as the blood-stained trading cards were tossed on the table. This was a still moment in any theater.

Now you may say "In what world would Marvel let War Machine's friend get killed? He's too profitable and it would have ruined the movie!" Oh, ye of little faith...sit down and I'll spin you a web from an alternate universe where things went another way. We'll call it the "Anti-Shawarma Universe." 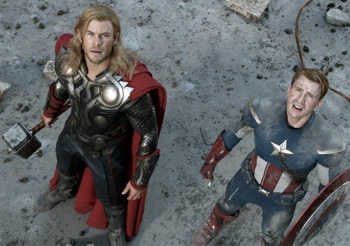 In the ASU, Iron Man flies into the portal with the special-effects bomb and, instead of falling through the portal before it closes, is a few second too late. Let's say the pivotal change is that Pepper "Legs still too long" Potts actually picked up the phone of her dying boyfriend and they had a bit of a chat. So we are stuck in a ruined-yet-saved New York, with the Avengers staring up at the sky wondering what has become of their friend. "He's alive, his suit will keep him alive!" yells Ruffalo, eager to get more lines in before they replace him again. "How we get to space?" asks Black Widow, a bump on her head reducing her intellect to that of the Hulk. "Well, we have this cube thing, let's just use that," says Thor, tired of talking like a Renaissance festival reject. So they use the cube to get into space, only to find...

...the Guardians of the Galaxy. (Kyle's Edit: ...*Keanu voice* Whoa. That's almost the Back to the Future Part II ending!)

You tell me that wouldn't be the best cliffhanger since Wrath of Khan.

Like what you see? Secure enough in your masculinity for more? Dan also works on No Right Answer, the weekly debate show that knows what's really important: Pointlessly arguing about geek culture.