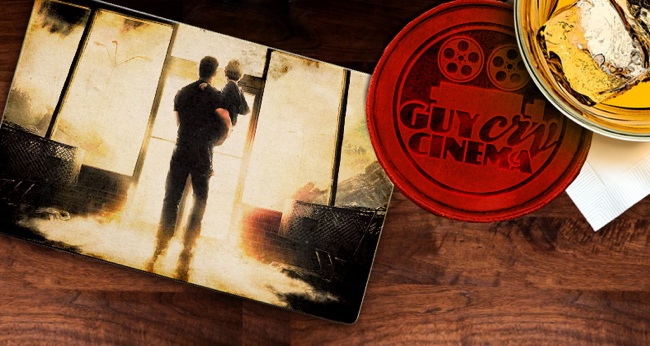 You may think horror movies can't be tearjerkers, but The Mist proves otherwise.

The goal of this series is to show that being "manly" and being disconnected with your emotions do not necessarily go hand-in-hand. While the approach to these articles is one of comedy and satire, the emotional core of these movies is very valid. Manly movies make guys cry, for example:The Mist-y Eyes. (The Mist. We're talking about The Mist.)

Stephen King is hit or miss with the film versions of his work, but when he hits... boy howdy. I suppose it helps when Frank "I created The Walking Dead for TV" Darabont directs and adds an ending King admitted was better than the book. There are actually two ways to watch this horror film, color or black and white. Which version you prefer depends on who you are and your sphincter strength. I personally chose the color version, only because I don't have diapers large enough to handle the monochromatic horror. Can this movie make guys cry as well as pee their pants? Oh, you betcha.

Horror movies generally get easily lumped into the "manly" movie category, only because they're traditionally movies that guys take girls to in order to get the coveted Scare Cuddle (©Firefilm and Escapist). This movie delivers on that front in spades. To my recollection, aside from the first Hellboy, this is the only Lovecraftian horror film done with a decent budget. We're talking tentacles attached to unfathomable terror coming out of the mist (ah, so that's why it's called that). Not romantic, not gentle, nothing but the horror from outside trying to get the protagonists, and the equally laxative-simulating horror of the human reactions in the face of this disaster.

It's manly in the same way getting shot in the shoulder and continuing to beat up the bad guys is manly: one is judged by the ability to endure the pain. There is A LOT of pain in this film to endure.

Thomas "Punisher" Jane is a family man with a wife and 8-year-old boy, and a tree through his window following a gargantuan storm. With the power out and a shortage of emergency supplies, Punisher and an inexplicably dickheaded neighbor drive to town with the boy to stock up. While perusing the local Piggly-Wiggly for...a new window, possibly?...Tom and the rest of the store are horrified and confused to see a huge cloud, or fog...something...covering the entire town. Hysteria follows confusion like an annoying little brother, and soon people are arguing the merits of staying put or running for the hills. One lady in particular ventures out alone to find her children and is never seen again (except she's absolutely seen again, but more on that later). The generator goes out, a stock boy goes to fix it, and HOLY *%#@! A TENTACLE/TEETH MONSTER TOTES KILLED HIM!

The store has suddenly become the center of a trapped-in-the-cabin horror scenario, except the cabin is a grocery outlet, the horny teenagers are a bunch of rural yokels, and the evil hell-beasts are...well, evil hell-beasts, but particularly scary ones. As folks start splitting into factions of increasing stupidity, Thomas is being forced into the role of pragmatic leader (despite being a fine artist by trade and not particularly interested in telling everyone what to do). This sudden responsibility is heavy stuff. Thomas is being forced into yet another universal quandary that pulls forth the emotional coil of us, the audience, as he is torn between his new job as the level-headed, reluctant hero and the panic-stricken parent trying desperately to hold his family together. This is a common archetype in disaster films, but Thomas' son is portrayed much more realistically as a petrified, emotionally-scarred child falling deeper into catatonic despair.