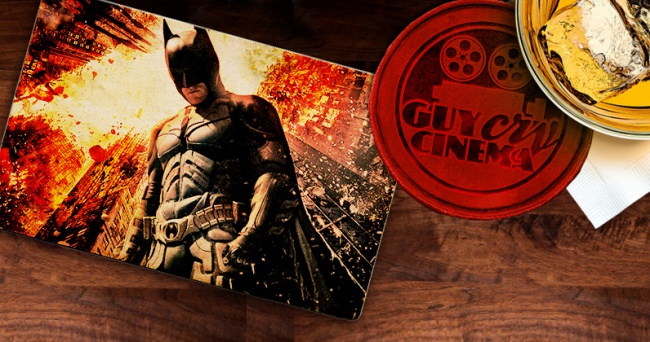 Christopher Nolan's Batman is practically a master course in manly movies -- so just why does this bat-flick make guys cry?

The goal of this series is to show that being "manly" and being disconnected with your emotions do not necessarily go hand-in-hand. While the approach to these articles is one of comedy and satire, the emotional core of these movies is very valid. Manly movies make guys cry, for example:

NO IT WASN'T BECAUSE OF BANE'S VOICE! Now that we've got that out of the way, The Dark Knight Rises was a fantastic film. Sure, there were minor flaws, such as Talia al Ghul being such a wiener at the end, and yes, Bane's voice SOMETIMES being muffled. But on the whole, we couldn't have asked for a better ending to Christopher Nolan's Batman trilogy. I mean, besides missing Heath Ledger. But this film, more than the first two -- and in fact BECAUSE OF the previous films -- is the emotional payoff that brings tears to guy's eyes.

Do I really have to explain why a Batman film is a "manly" movie? Explosions, fist fights, gadgets, Batman, that Catwoman outfit...Batman some more. The gap there is because the middle of the movie had Bruce Wayne doing pushups at the bottom of a pit! Now that's manly! However, Christopher "Complicated Plot" Nolan has injected more heart and soul into this world than any other Batman director.

This film makes several expert callbacks to the previous two films, and it's nearly impossible to follow the plot without seeing them. We start out establishing the goofy Bane voice that the film pretends is menacing, but then he backs it up by being legitimately menacing so we're ok with it. Then we skip over to watch Anne Hathaway earning the right to be drooled over by anyone watching, and all but erasing Halle Berry's performance as Catwoman from our minds. Christian "gargling peaches" Bale has an odd cameo on "Reno-911," and then sulks around because reasons. It's hard to be rich, amiright? Bane starts orchestrating a long plan where he steals all Batman's money (oh yea, he figured out who Batman is, cause that's how it went in the comics), and then steals a McGuff-nuke to hold the city hostage.

There are a few running themes in the trilogy that start to gain true traction here, all rotating around Alfred. While Bruce Wayne is ostensibly the protagonist of this film, Officer John McNotRobin is really more of the hero and Alfred is the Shakespearean tragedy akin to King Lear.