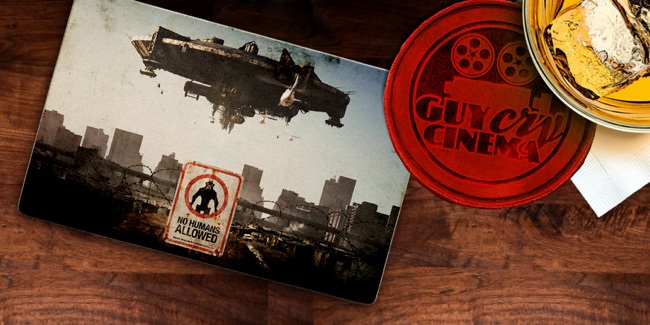 Even the most action-packed sci-fi movie can be a tearjerker if you look at it right... like alien invasion flick District 9.

The goal of this series is to show that being "manly" and being disconnected with your emotions do not necessarily go hand-in-hand. While the approach to these articles is one of comedy and satire, the emotional core of these movies is very valid. Manly movies make guys cry, for example: District 9.

With all the racism and hatred in the real world right now, it's easy to forget that humans can be horrible in fiction as well! The best part is, with all the movies that came before District 9 painting alien visitors as either saviors or destroyers, it's not too hard to imagine that in response to mediocre extra-terrestrials we would feel disappointed at best and betrayed at worst. How dare they not fix all our problems or how dare they not bring us all together in our quest to overcome their tyranny? That's basically the starting point of this intense film, and it really never lets up.

Is it a "manly" movie? Survey says hell yeah. First off, it's chock-full of goo from alien egg-sacks exploding and humans exploding from advanced weapons fire. The gross-out factor continues with the extremely realistic alien "Prawns" that look like humanoid cockroaches with shrimp for mustaches. These cousins of Zoidberg and their science fiction plight for survival mixed with the despicable humans trying to use the aliens for their own means equals a movie you don't catch after a romantic dinner for two. Unless it's a really special occasion.

This film makes guys want to kill all humans, and shed a tear while doing it. Allow me to explain the dark reason why, because it may not be what you think.

The plot is so simple, one wonders why it hadn't been tried before: aliens all but crash-land on Earth, but in South Africa instead of America like NORMAL aliens. Once we realize they're sick, malnourished and poorly educated, humanity shoves them into ghettos and treats them like crap. You know, like sick, malnourished and poorly educated humans (this film is like 90% unsubtle social commentary). Sharlto "I'm awesome in everything" Copley is a bureaucrat working for a private military company, because when has that ever gone wrong? Sharlto is tasked with preparing the aliens for relocation to District 10, another living camp further away from the humans of Johannesburg who've expressed distaste for the visitors. A white male in Africa being racist and kicking people off their land? I cry science fiction!

The film barely establishes Copley as a guy who loves his wife and loves his job, then shows he's a bad guy via what can only be described as "abortion via flamethrower." In his eyes the aliens don't register as worthy of compassion or humanity (well, they technically aren't human), so he belittles them, abuses them, and all but murders them for standing around. With this as the main character, the film has to bend over backwards establishing even worse people as the antagonists. There's an African warlord that eats the aliens in an effort to gain their biological key that activates their tech, there's the generic private military guys that love shooting things (because who else is going to?), and there's Copley's father-in-law who runs the whole private operation.

The main story starts when (spoiler alert) "that guy that chopped Angelina Jolie's wings off" accidentally spills some alien fuel on himself and starts turning into one of them. Though his physical transformation is slow and methodical, the way people treat Copley takes an immediate nose dive. Right away, Stepdad tells his daughter that Copley died, then orders his men to capture the potential human/alien hybrid cash cow. Of course the completely non-racist African warlord just wants to EAT Copley, so the alien guns will work for him. Good luck with that. And of course the gun-happy private military guys want to shoot him, because he has a heartbeat and they hate that for some reason. No one has motivations that aren't selfish, destructive or atrocious.