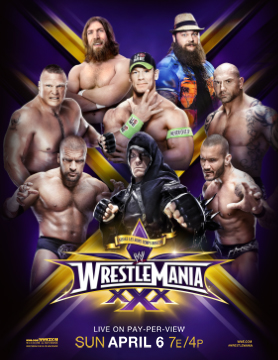 Oh, don't give me that look. There's a hundred other TV journos recapping Game of Thrones. I spent my Sunday engaged in my annual tradition, watching WrestleMania. Their venue? The New Orleans SuperDome. My venue? A chain bar/restaurant that was showing it, because Pay-Per-View is expensive and also I didn't feel like cooking. Which one? Never you mind which one. Suffice it to say, nocturnal Strigiformes and cheeky double entendres are involved.

That's not to say that I'm only hijacking my own column for a sports-entertainment recap because I felt like professionally justifying one or more of my tragic manchild vices (although, come to think of it... I guess that's literally my entire schtick. Huh.) Apart from being an annual event, this year's WrestleMania (number 30, if you're keeping track) is positioning itself as a legitimate game changer for televised events. It is the biggest test yet for WWE Network, the titular company's newest venture - a subscription service offering access to all Pay-Per-View events and also a streaming backlog of matches from the institution's archives (and the archives of the various institutions it's managed to absorb over the years) which some believe could be the next big thing in an evolving broadcast landscape already rocked by Netflix and the Cable Renaissance.

Since WWE can only hold so many PPV events a year, it's that aforementioned back-catalogue streaming that's been the big fan-marketing push thus far, meaning that nostalgia is the company's main brand at the moment. Thus, this 'Mania leaned heavy on cross-generational callbacks starting with the presence of Hulk Hogan as the event's host. The event started with a pre-event 4-way Tag Team Championship match between current champs The Usos, Los Matadores, Curtis Axel/Daniel Ryback and The Real Americans, but my broadcast skipped that part. The Usos kept their title.