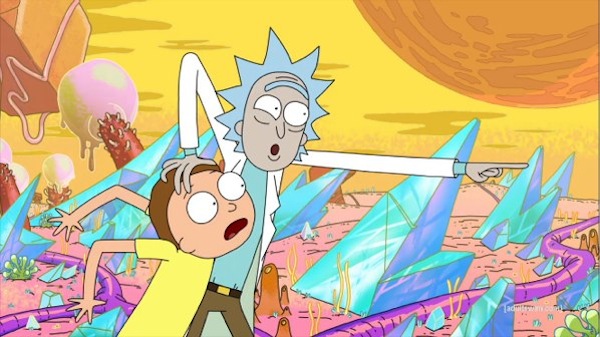 I've mentioned this before, but it bears repeating: The reason this TV column looks different from others is that I'm not much of a "TV Fan" by the current definition of the word. I don't really do so-called "appointment television" outside of sporting events, and even my DVR viewing is typically weeks behind schedule.

During the week, I'm usually out at movie screenings or otherwise on the road during prime time, and my overnights are spent writing columns and editing videos - during which the TV stays on, but mainly tuned to either news or comfort-food reruns I can half-watch in the background. Especially House, Law & Order, Adult Swim... Lord, how my productivity will skyrocket once FXX's programming switches over to "The Simpsons, plus other stuff maybe" this Fall. On Sunday nights, while the rest of my Twitter feed is exploding over whichever HBO or AMC drama is The Greatest Achievement In Human History this cycle, I'm usually busy polishing this column or The Big Picture - unless The Venture Bros are airing new episodes, of course.

All of which explains why it took me so long to even bother watching Rick & Morty. Well, part of why.

The other part was that, frankly, it didn't look or sound that promising. Even if I did eventually join the geek-journo consensus that Community was indeed a great show, the prospect of creator Dan Harmon getting to build a whole series out of the meta/sci-fi digressions that work so well as tangents on that show sounded like overkill waiting to happen. Another red flag? The obvious name and design allusions of the title characters to Doc Brown and Marty McFly.

Revoke my GenX card if you must, but if there's one 80s classic I never ever need to see "affectionately parodied" again it's Back To The Future, a great film so easy to spoof that "let's make fun of Back To The Future" was pretty-much the literal plot of Back To The Future II & III. In other words, the whole thing looked and sounded like an extended Family Guy cutaway: "What if Doc Brown was a jerk???" 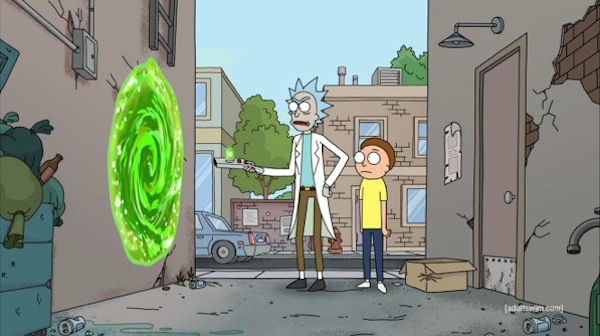 Well, as it turns out I was wrong. Really wrong. Wronger than I've been in a long time - and I get pretty damn drunk sometimes, so I've made a lot of wrong life-choices (like, for example, typing "I get pretty damn drunk sometimes" on The Internet, where exaggeration-for-effect goes to die.) Not only was I wrong about probably not liking this show, I think I might love it. Once you get past its rough, aggressive exterior, Rick & Morty reveals itself as a kind of comic miracle. A broad-swiping cartoon sitcom that lives comfortably in the "skin" of a Family Guy-style crude-for-crudity's-sake belly-laugher while simultaneously existing as a work of genuine high-concept science fiction humor almost good enough to fill the Futurama-shaped hole in the genre.

It's a hard show to describe without sounding like your just throwing out "sounds great on paper" ideas that even a bad producer would recognize as unsustainable beyond a one-off sketch. Is it "Doctor Who, but as an American dysfunctional-family sitcom"? Yes, but better. Is it "Dexter's Laboratory all grown up"? Yes, but better. "Inspector Spacetime: The Series"? Yes, but better. Even simply listing off its obvious (intentional or not) cartoon history influences is liable to sound like overpromising. That list includes Rocko's Modern Life, Liquid TV, The Head, Ralph Bakshi, the aforementioned Dexter's Lab to name a few. Are you describing a show or trying to send Western animation fans into fits of nostalgic priapism???