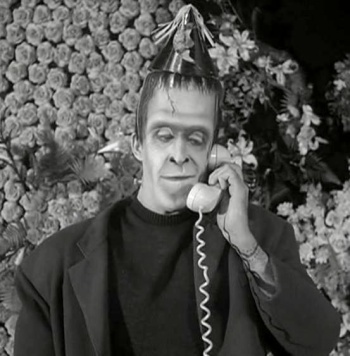 A common misconception about popular entertainment of the recent past is that genres and formulas stagnated because the people making them were just as married to comfort and repetition as their audience. In reality, creators frequently got bored of pulling the same levers day after day and looked for new places to go -- that's why Golden Age Superman comics are so famously bizarre: After less than a decade, the writers knew they'd exhausted "new" scenarios for the Man of Steel and turned to playing around with the logic-holes in his setup. (Example: Clark Kent and Superman are actually seen together all the time thanks to the Superman Robots.)

The mid-1960s is when the American situation comedy coalesced into the form it would follow with rare exception into the present: Comic microdramas set in and around a suburban home and the exploits of a well-meaning dad, loving mom, precocious children and a wacky neighbor/relative/adult-friend onhand if any extra absurdity was required. The formula was proven, easily replicated... and clever writers were looking for ways to subvert it almost immediately -- think The Flintstones, built entirely around the joke of the sitcom formula holding up even for a family of cartoon cavemen.

And for two seasons between 1964 and 1966, ABC and CBS each gave the formula a gothic makeover with a pair of now-iconic series: The Addams Family and The Munsters; which not only gently skewered the rigidity of their own medium (even with a family of ghouls, the sitcom is still The Sitcom) but offered subtle commentaries on the nature of the "real" world watching at home in an era where TV comedy was supposed to stand against social-issue introspection.

The Addams Family is probably the better-remembered of the two series, largely because its characters' "weirdness" was harder to pin down and the overriding joke was more loudly subversive. The family was, by any definition, macabre and bizarre -- something not-insubstantial was wrong about them... but as far as they were concerned, they were the normal ones and "everyone else" was the weirdo. (MESSAGE!) 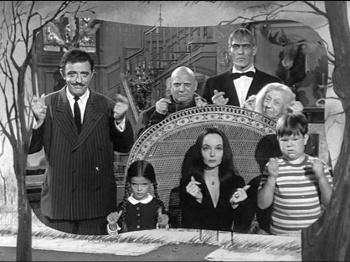 The Addams (patriarch Gomez, wife Morticia, son Pugsley, daughter Wednesday, Uncle Fester, Granny and butler Lurch) are a family of wealthy eccentrics who appear to be vaguely supernatural or at least not entirely human, and whose mannerisms and taste in décor feel like a toned-down take on secret-occult characters popular in horror comics and pulp magazines of a decade prior. Lurch looks sort-of like Frankenstein's Monster and behaves vaguely like a zombie, and Granny claims to be able to ride a broom, but that's about as specific as it ever gets. Instead, they appear to be more catch-all "supernatural" creatures: Gomez performs feats of superhuman agility and ignites his cigars without matches. Fester electrocutes himself for fun. Morticia and the children are apparently capable of enduring (happily) what would be lethal pain to a normal human being.

In a note of irony frequently raised in regard to the show, attempts to show the Addams supposed "weirdness" in contrast to the "normal" image of the All-American Family instead made them look rather preferable and even "ideal" (in a progressive sense) to subsequent generations who made the series a classic in syndication. Whereas other TV dads were stern authority figures whose role was to gently discipline their misbehaving children and keep them on the straight and narrow, Gomez (and Morticia) generally had nothing but enthusiasm, support and encouragement for Wednesday and Pugsley's self-expression -- even when it involved trying to mortally-wound one another.