RETURN TO THE PLANET OF THE APES (1975)
This animated series from DePatie-Freleng Enterprises was, for a time, one of the more obscure parts of the Apes arcana, having aired for only 13 episodes in a Saturday morning timeslot in 1975 before slipping into minimal-syndication limbo. A pity, because in hindsight it's one of the more unusual pieces of the canon.

This time, it's three astronauts (a white guy, a black guy and a woman) who find themselves on the run from angry apes. But while characters from both the movies (Cornelius, Zira, Zaius, Nova and even Brent) and General Urko from the TV series appear, this doesn't appear to the same Planet we've seen before: These apes have a modern civilization, with sprawling cities, ornate architecture and thoroughly modern technology including cars and planes -- thusly, it's actually a bit more in line with the world as depicted in the http://en.wikipedia.org/wiki/Planet_of_the_Apes_(novel) " title="" target="_blank">Pierre Boulle novel that the original film was (loosely) based on. In addition, the freedom of animation allows the world to include more fantastical elements such as giant dinosaur-like flying monsters and a King Kong-sized ape "god" -- a battle between the two occurs at the climax of the final episode.

In addition, the animation itself -- though limited in terms of actual movement and character models -- makes striking use of light and shadow along with richly detailed background models. The series' design was supervised in part by comics and cartoon legend Doug Wildey, the co-creator of the visually-similar Jonny Quest. 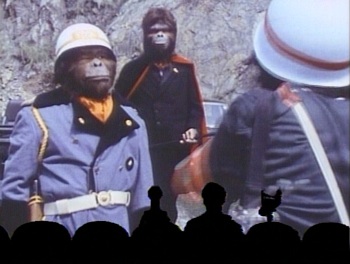 ARMY OF THE APES (SARU NO GUNDAN) aka TIME OF THE APES
Also produced in 1974, Saru no Gundan ("Army of The Apes") was a Japanese television production from Tsuburaya that loosely reworked (to an even greater degree than the movies) the plot of the original Pierre Boulle novel into a youth-targeted adventure series whose 26 episodes make it the longest-running television project related (however tangentially) to Planet of the Apes. The inspiration for the series was the spectacularly strong performance of the Apes films at the Japanese box-office, where the franchise was so popular that an extended cut of Conquest of the Planet of the Apes received theatrical distribution.

In the series, a female scientist and a pair of young children are inadvertently frozen in cryogenic pods during a volcanic eruption and awaken in a future of talking, upright-walking apes. To date, this is the only live-action depiction that mirrors Boulle's modern, technological ape society -- though in this case it is also a military dictatorship with a secret police and political conspiracies. In this respect, it's actually more similar to Irwin Allen's Land of the Giants than any of the Apes features.

For many years, Saru no Gundan was largely unknown outside of Japan, save for Sandy Frank having re-edited the series into a 90 minute "movie" for U.S. television in 1987 titled Time of the Apes. But when that version was featured in the third season of Mystery Science Theater 3000, (after having been part of the show during its original public-access "Season Zero") its awareness skyrocketed -- it's now considered one of the classic episodes of the series.