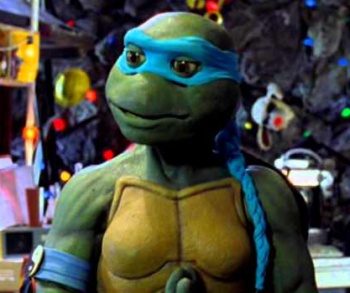 The result was 1997's The Next Mutation, at the time the most ambitious live-action undertaking Saban (with TMNT co-creator Kevin Eastman as a co-producer) had launched without repurposing foreign footage and from its inception the most radical attempt to overhaul the TMNT franchise since the toy company had decided they really did need to at least wear different colored masks. (Though a proposed fourth movie, from which the show borrowed the Next Mutation subtitle, would've been even more so.) Remember: The Turtles were damaged goods at this point. Their first generation fans were in high school and college and had largely consigned them to the yard sale or the attic -- Mutation was aiming to build a new fanbase from scratch.

The changes? Continue (at least in passing reference) from the continuity of the live-action movies, but build a new team dynamic and a whole new status quo: Trade Shredder and The Foot Clan for a more inhuman set of enemies (human leads aren't as easily replaced/lowballed as stuntmen in rubber suits) in the form of Dragon Lord and his army "The Rank," whose escape from a dream-dimension and attempted invasion of the Earth was the overarching meta-story of the series. Other baddies would include a mad scientist, a bald-faced ripoff of Kraven the Hunter, and a Yeti who'd reinvented himself as a gangster.

They wanted to change the Turtles' signature mask-colors (Leonardo from blue to yellow, Donatello from purple to black) -- supposedly to avoid color-key issues with the heavy blue-screen work needed for the show but perhaps also as a way to checkmate "But you already have the purple one!" in the toy aisle. They planned to retool the weaponry: A single straight-sword for Leo instead of twin katanas, tonfa batons for Michelangelo to get around the marketing headache previously caused by nunchucks being banned (and heavily stigmatized) weapons in the UK and some other territories. The color changes didn't make the final cut, but test footage and promo-shots of Leo's banana-yellow headwrap made it into the wild and can be briefly seen in some versions of the opening titles.

Oh, and April O'Neil and Casey Jones were both out -- again, human regulars being less easy to replace/lowball than stuntpersons in rubber suits. But what to do with April's now-vacated spot as the lone female main character in an otherwise overwhelmingly male cast? Simple...

They gave the world its first female Ninja Turtle.

To the degree that TMNT fans think about The Next Mutation at all, Venus de Milo (yes, the guys are all named for artists, the girl is named for an art object, because of course she is) tends to be the martyr for everything else it did wrong -- which was a lot. It'd be nice to say that she gets a raw deal, that the reflexive misogyny that seems to permeate so much of fandom for 80s/90s nostalgia properties has rendered a promising addition to the series to the pop-culture dumpster. But the truth is, while Venus isn't the sole flaw of the show... she's pretty terrible.

In fact, you could practically teach a class on how not to add gender diversity to an all-male franchise just using Venus as an example. She gets an exaggerated feminine musculature (compared to the guys, who are all bruisers) and strikes model-girl poses despite it being at odds with what she has of a personality. Inexplicable turtle-breasts --on her shell, no less? -- you bet she's got 'em. Cheezy new-age psychic powers in lieu of weapons? Of course -- you can't expect her to lift something! To their credit, they did somehow resist the temptation to give her a pink mask (though that was the plan for most of pre-production) instead opting for a light-blue one... that she ties into a french braid that hangs down to her waist. And that's just the obvious aesthetic stuff. (Oh! They also go the obvious heavy-handed "love this great new character!!!" route by having her defeat The Shredder -- for good! -- using her mind powers on her first mission. Because no ever resents that kind of thing...)