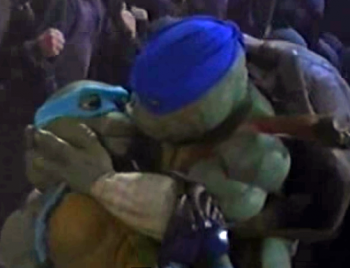 Venus' backstory is that she was in the same bowl and mutated by the same ooze as the original four, but raised separately and in secret by a Chinese mystic who taught her mind-powers. This is used to establish her two main character traits: She's "exotically" Orientalized (exaggerated pan-Asian accent, undercuts her own intelligence by comically misunderstanding Western idioms a'la Ziva from NCIS) and she's the Team Buzz-Kill -- in fact, on some of the promo posters her "catchphrase" was "I keep the boys in line!" On a team made up of four wacky slapstick martial-arts comedians, the one woman... is the boring serious "eat your vegetables!" Den Mother. It's like they wanted everyone to hate her.

Well... not everyone. Since a female character cannot be conceived as existing without being the romantic interest to someone, The Next Mutation opts to blow up the entire status-quo of the main characters in order to make it "okay" for Venus to be potentially romanced by one of her adoptive brothers; as Leonardo reveals that, being ordinary pet-shop turtles, none of them were ever actually blood-relatives. Granted... that actually makes sense, but it's hard to ignore that an ostensible children's show devotes an entire scene (staged as Venus and Leo awkwardly flirting under moonlight, even!) to two characters carefully explaining to the audience: "Don't worry -- if we eventually hook up, it's technically not incest!" And yes, the plan was to have Leo and Raph fight over her. 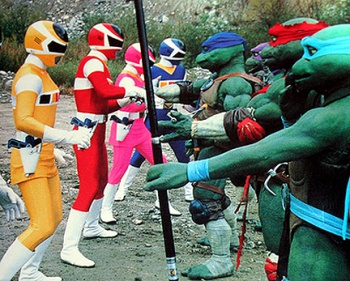 The Next Mutation got a lot of press, decent ratings and a full season order of 26 episodes from Fox... but it didn't last. The studio and the network wanted another Power Rangers level merchandising machine, and the show wasn't drawing old fans back into the fold or driving new ones to buy up the new toys (the hoped-for embrace of Venus by young girls failed to materialize rather profoundly). Fox declined to renew the show for a second season, leaving a plot-thread teasing the return to top-villain status of The Shredder unresolved and new TMNT adventures absent from film and television for the first time since 1987 -- an absence that would remain until a new animated series launched in 2003. Today, the series is mainly remembered for a crossover episode with the Power Rangers.

The franchise's official website actually opted to finish out the story informally in the form of letters from all of the Turtles detailing post-Next Mutation adventures involving the final defeats of all of their major villains... but as of 2000 all reference to Venus outside of casual mentions in the other Turtles' letters were scrubbed from the site and from anywhere else such removal is possible. Supposedly, this was the result of original TMNT co-creator Peter Laird (who is said to harbor a specific resentment of Venus) acquiring total ownership of the characters and imposing a "No female turtles, ever!" mandate on the property. I'll be honest: That feels like overkill, to me.

Looking back over Next Mutation in light of the staggering awfulness that is the new (Laird-approved and girl-cooties-free, I might add -- ahem!) theatrical "face" of the franchise... it still isn't very good. But it's looking a lot better in hindsight. Even with Venus hanging around being exactly unlikable enough to almost cancel-out the goofy sexism that contorts her role in the story, it at least feels vaguely akin to characters and world as they'd otherwise been known. It has that goofy retro-sincerity that made the better early Power Rangers seasons work, and there are even moments where you can see how Venus might have eventually been made to work.

In the end it's almost a shame -- for awhile there this series' profile actually benefited from the infamy of being the worst TMNT ever. Now that Michael Bay and Jonathan Liebesman have stolen that title rather decisively, The Next Mutation just goes back to being one more Ninja Turtles revamp that didn't really work.