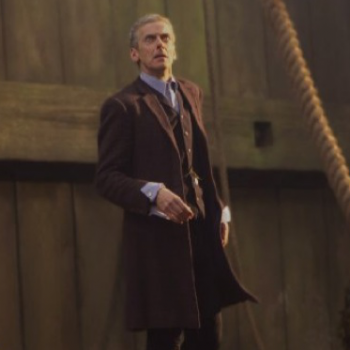 Watching Doctor Who as a non-Whovian is a fish-out-of-water kind of experience.

Okay. So, the premise here is that I'm watching the season (and "New Doctor") premiere of Doctor Who without actually being all that familiar with Doctor Who, the idea being to see how a show with such a long legacy (that part I already knew) whose modern iteration is built so much on self-reference (I've been told) plays to someone who's coming to it fairly cold. Alright, I'm game for that -- even though it likely means the beginning of being endlessly inundated with "Now do one for _______!!!"

Now, to be clear: I'm not exactly ignorant of Doctor Who. Lack of exposure does not, in this case, correlate to a lack of interest or appreciation. Nerd culture didn't always have the same level of instant cross-pollination as it does now, and Whovian fandom fell mostly outside my immediate circle of acquaintances in that regard. As geek niche-cultures go, I mostly ran with the video game playing, comic-book collecting, anime-seeking, movie-junkie crowd that grew up to work in video stores and comic shops, while the majority of Doctor Who aficionados I ran into tended to be of a slightly older vintage, had strong opinions of various editions of Dungeons & Dragons, referred to golden age sci-fi authors by their first names, could marathon-quote Monty Python routines from the show instead of just the movies, and had jobs in libraries or record-stores. By the time I was old enough to be hitting the convention circuit in any real capacity, the show was off the air and hovering (even further) on the fringes of nerd ephemera.

BUT! to borrow a reference from that one Robot Chicken sketch, I feel pretty confident that I've absorbed the gist of it through nerd osmosis. Suffice it to say:

I know that the main character is just called "The Doctor," in spite of the title.

I know that he's an alien called a Time Lord from a planet called Gallifrey (fray?) and that he's exceptionally long-lived, partially due to an ability to regenerate in a new body at "death." And I know that in these new forms he tends to have a new personality and what memories/traits/etc remain is nebulous at best.

I know that the last few incarnations were of the boyishly-handsome variety while the new one being (officially) introduced tonight in the person of Peter Capaldi is on the older side and that not everyone is thrilled about this.

I know that he travels through time (and also space) via a vehicle called a TARDIS that looks like a (now doubly-anachronistic) blue police call-box on the outside but a spaceship/command-center on the inside.

I know that he has two sets of enemies who are robots, called Daleks and Cybermen, and that the ones who look fairly useful and threatening are somehow not as dangerous as the ones who look like slightly less-effective versions of those things from Chopping Mall.

I know that he has a weapon/tool called a Sonic Screwdriver, which is functionally a magic wand except full of science.

I know that the modern incarnation of the show is technically in-continuity with the original 60s -- 80s seasons (and a bad TV movie from the 90s, which I have seen), but uses "wibbly-wobbly timey-wimey" quantum-theory business (yes, I've seen the one with the Weeping Angels because apparently that's the one fans have agreed is best to show to non-fans as an enticer) about infinite possibilities, timelines as a license to reintroduce, reinvent, revive and discard classic/fan-favorite characters, locales and storylines from the good old days.

As such, I also know that it's an aesthetic conceit of the modern series that while much of it looks up to date and "current" design and FX-wise, recurring elements from the old shows tend to preserve their kitschy look/feel for charm's sake.

I know that he's frequently accompanied by a sidekick or two, but that we're to refer to them as "companions."

And I'm tangentially given to understand that the wrap-up of the previous incarnation's last season apparently brought to the forefront a bunch of questions about the relative good/evil of The Doctor's actions throughout the series.

Is that enough to appreciate (or even understand?) what's going on in this premiere? Well, I'm going to watch it and find out. And then I'll report back after... without looking up anything that might have confused and/or piqued my interest in between, since that would defeat the purpose of this thing.