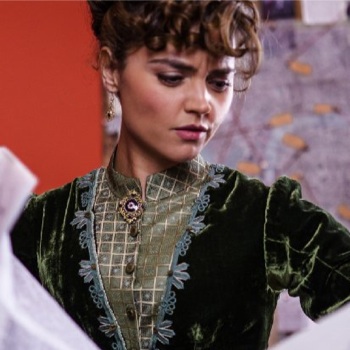 In any case, the dinosaur spontaneously combusts and The Doctor (who was awake doing Beautiful Mind chalk-drawings) runs off to investigate, which means Clara and the girls and the lumpy guy (whose dialogue suggests I'm meant to recognize him as a Classic Who nemesis) get to launch a similar investigation of their own. For The Doctor, that somehow means wandering into an alley and getting into a mumble-off with a hobo intersped with in-jokes about the costuming of past incarnations and his joy at realizing that he's Scottish this time and "Can really complain about things!" (Heh!) For the ladies, that means having more witty banter while Lizard Woman appears to be painting her wife's portrait... only to turn the canvas around to reveal it's an evidence board and she just asked her partner to pose artfully because... well, why not?

Okay, show? I get it. These two are adorable. Perfect double-act, great routine, appealing actors. Sold. I'm onboard. Can we pick the main story back up? Because it seems like there's a lot of extra business crowding-out the main "What exactly IS these people's relationship now that one of them is literally a different person?" story that feels like it should be at the forefront, though granted I don't know the history well enough to know if it's an unusual turn for a companion to still be hanging around during/post a regeneration.

Clara's investigation means finding lunch invitation in the newspaper that used the previous Doctor's nickname for her ("The Impossible Girl,") and heading to a restaurant. She meets The Doctor there, but both of them each think the other planted the clue. Okay, that's cool, and it unravels into a back and forth between the two of them where they both think the other's criticisms are self-criticism. I'll be honest: The stagey banter is a little bit tiresome, but they've got good chemistry.

The "restaurant" turns out to be populated entirely by automatons who won't let them leave and send them down to a dungeon in the lower level -- like a Roach Motel for humans operated by a "sleeping" Steampunk Terminator, who turns out to be a cyborg -- or, at least, a robot who's been building himself into a human over the centuries by stealing parts. Given how matter of factly this is presented, I'm guessing this guy (and this scenario) are a either an homage or straight do-over of something from the earlier seasons.

In any case, Steampunk Terminator wakes up and The Doctor appears to abandon Clara to escape which is clearly supposed to make us wonder if he's really so different a guy now that he'd actually do that... which really doesn't work dramatically. I get that The Doctor is different and more "alien" now, but since he's chasing this mystery in the first place because he's upset about the T-Rex getting killed "callous" doesn't feel like a plausible trait. Sure enough, moments later he turns up "disguised" as one of the automatons that's been there the whole time (Good! I like it when time-travel actually gets used to do things other than set up what era a story is taking place), thus revealing that briefly stranding Clara served mainly to set up the trick to outwitting these automatons: If you don't breath, they think you're a robot, too, and stop advancing. Is the obvious similarity to the Weeping Angels (frozen when looked-at) supposed to be self-satire? I'm not sure.