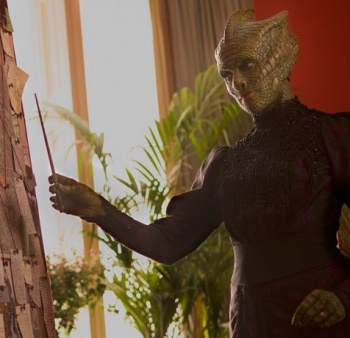 This is getting a little long, so: Victorian Interspecies Xena & Gabrielle come crashing in ninja-style (swords, even!) on Cirque du Soleil ribbons to help fight the robots. Steampunk Terminator deploys a giant balloon (made of skin?) to take his base airborne over London, and he and The Doctor chase each other upstairs to have it out like gentlemen. We learn that the villain is trying to become human so he can die (?) and "go to paradise," which The Doctor concludes is a delirium he's absorbed into his now-mangled programming from all the humanity he's tried to graft onto himself over the centuries (okay, that's an interesting idea). They seem to arrive at a stalemate because Steampunk Terminator isn't programmed to kill himself and The Doctor is similarly disinclined to kill an enemy.

Down in the dungeon the good guys are being overwhelmed (I'm not sure how, since their attackers seem to made mostly of brass and dead people) and have to do the no-breathing thing, which Lizard Lady and wife are able to accomplish handily through some sort of "kiss of life" move the mechanics of which I'm still unclear on. Good tension builder, though, cutting off when the robots stop because Steampunk Terminator has been impaled on the spire of Big Ben. Ah! Okay, I get it: We're supposed to wonder if The Doctor actually did talk him into stopping his insane schemes or if this new Doctor actually is willing/capable to play judge, jury and executioner against his foes. Good angle. I like it.

As we wrap up, The Doctor and Clara have it out once and for all re: him venting about how he's upset that she doesn't seem to want to accept his new form/personality. Question: I get that this is still meta-on-meta talking to Clara but really talking to the audience stuff, but do they really feel that's necessary? I get that people historically get really attached to their first/preferred/favorite Doctors, but are they really expecting that there are enough fans devoted enough to be included in this lecture to actually need it? Is there really a reasonable worry that Matt Smith's departure is going to take that much of the audience away with him?

I'm asking sincerely, because otherwise this angle feels a bit like overkill at this point -- The Doctor even explicitly tells Clara "I'm not your boyfriend," which struck me as something like a middle-finger to the show's famously-devoted female fanbase. Anyway, it gets resolved because Clara gets a phonecall from the past: It's the prior Doctor, and he says his big goodbye and tells her to give it the old college try helping the new guy -- who, a scene later, shows off his new duds (he looks sort-of like a stage magician who lost his hat and rabbit), a redecorated TARDIS interior and drops the new mission statement: He wants to go about fixing a history of mistakes... his own. I like the sound of that.

As a final coda, Steampunk Terminator wakes up seemingly unscathed in a posh English garden with an unnervingly-upbeat matronly woman who assures him he's reached "heaven," twirls an umbrella around and seems to refer to The Doctor as her "boyfriend." I have no idea who this is, and no idea if my reaction is meant to be "Who are you, now?" or "Oh no, not her!" But okay, I'm keen to find out.

I liked it... with reservations. The plotting is sort of messy, in that the B-story about teaming up with Lizard Woman's crew to fight Steampunk Terminator was so busy it kept overwhelming the main "meet your new Doctor" stuff, which as a result seemed to exist mainly (apart from some fun physical comedy as he dashed off toward the suddenly-burning dinosaur) as a series of meta-self-reference routines instructing the audience to get over Matt Smith already. Not to start lecturing myself, but maybe a better way to get the audience onboard with the new guy is to have him do more cool/fun/interesting stuff?

On the plus side: It was a lot of fun. Capaldi is an interesting presence -- capable of being silly, serious and at a few points a bit on the frightening side -- and his Doctor has a likable rapport with Clara (who I'm still not sure why people are so bothered by?). Lizard Woman & Wife were a consistent delight as supporting characters even if I still don't know what their "deal" was (they announce themselves like government agents of some sort when they attack the robots, I think?) so I'd hope to see more of them.

What I can say for sure is if I'd just happened upon it without intending to (and likely being even more unfamiliar than I am) I'd probably be compelled to find out what the hell this is and where I can see more of it. Make of that what you will. Now, to go look all this stuff up and see how wrong I got everything...