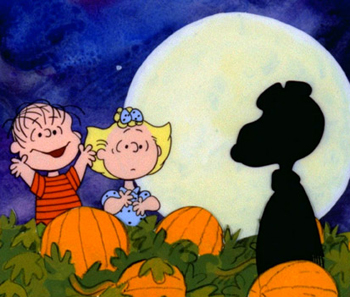 48 years on, the peanuts special is the pinnacle of a genre.

I'm fascinated by Halloween, and not just because it's my favorite holiday - a lone 24 hour period (and month-long lead-up) wherein my ever-present affections for monster-movies and other macabre concepts were "validated" by the rest of the world around me.

The history and makeup of the celebration's modern incarnation is almost a "Reverse Christmas" in that it's a hugely-commercial annual celebration whose offbeat collection of "traditions" (most of them barely a century old - if that) largely grow from the ground up to be absorbed by the commerce-culture, rather than the other way around: Particularly in the United States, Christmas is the time of year that Coca-Cola, Wal-Mart, Hallmark and the "family togetherness" entertainment/industrial-complex tells the public what they're supposed to want; while during Halloween Season "we the people" declare our fears, fascinations and fetishes so that said complex can catch-up to them.

And there's no single piece of seasonally-themed art or entertainment that "get's" the identity of Halloween as The People's Consumption-Based Holiday as It's The Great Pumpkin, Charlie Brown! It's a simple story, like most of the better Peanuts specials - built on equal parts sincere, honest affection for certain aspects of children and childhood but also a blunt admission of the failings of people and their world.

In case you need the refresher: The story takes place over roughly 24 hours from the morning of Halloween to the morning directly after, following three distinct story-tracks built around three main characters' experiences during the holiday: Charlie Brown has been invited to a post-Trick-or-Treating Halloween party - by mistake. Snoopy is absorbed in a long-term bit of play-acting built around his WWI Flying Ace costume. But Linus, for a change, has the "title" storyline: He's utterly caught-up in a set of Holiday rituals involving a Santa Claus-like figure called The Great Pumpkin - a tradition that only he seems to acknowledge (and likely created.)

All three stories end in letdown, one way or another: Charlie Brown is humiliated both Trick-or-Treating (people give him rocks instead of candy, possibly because he somehow cut too many holes into his ghost costume) and at the party (Lucy and her girlfriends use his round bald head to practice jack o'lantern faces). Snoopy "loses" a fantasy dogfight with The Red Baron and imagines himself sneaking across enemy territory to the party. Linus actually manages to get Sally to wait in the pumpkin patch for The Great Pumpkin with him... only to have His failure to appear be enough to finally break (however briefly) Sally's crush-spawned need to put up with him. He faints and passes out in the patch, with Lucy left to drag him back home and put him to bed. The next day, Charlie Brown tries to engage him one letdown man to another, only for Linus to rebuke him: He's more committed to his "faith" than ever, figuring that he must have committed a faux-pas at some point leading to his denial.