Television has long pushed the worst kind of gamer stereotypes into the pop culture limelight.

There's been a lot said recently about the viability of the "gamer identity" as a pop-cultural force. We're in an age where the demographics of gamers and the definition of what being a "gamer" means (if anything) beyond simply a person who likes to play video games is up to question -- up to and including whether or not it's time to retire these ancient niche-definitions and move on altogether.

In between all the finger-pointing and muckraking, one thing becomes clear: That whole conversation is heavily informed (poisoned, even) by at least two decades of the broader popular-culture -- television in particular -- making "gamers" into easy jokes, cheap caricatures, gross stereotypes and socio-political punching-bags. And while things have (to some extent) begun to swing the other way (and while it absolutely cannot excuse extreme reactions to perceived persecution among anybody) it's true that the image of the fat, greasy, antisocial creeper marinating in Mountain Dew and Cheeto-dust in Mom's basement has been as hard an image for gamers to shake off as "pandering power-fantasies for insecure teenage bros" has been for the games industry to move away from. And it's also true that TV has often done its best to perpetuate that image.

So, here are ten of the most egregiously-unflattering depictions of games and the people who play them to have graced the small screen... 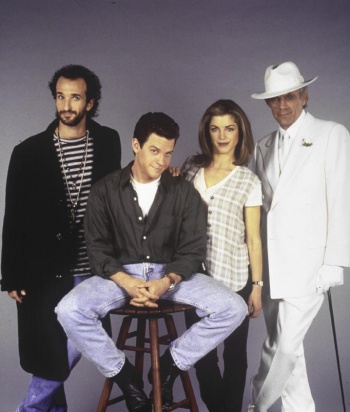 We've talked about this a bit before, but it still amazes me how prescient this (otherwise awful) 1994 UPN action series turned out to be about certain less-than-lovable public-perceptions (please note that this isn't a "Least Accurate Portrayals" list) of gaming and gamers in the near-future.

Our nominal hero, Gus is a physicist who works out his personal-life stress by making an (insanely high-tech for 1994) homebrew FMV game in which "The Cold Steel Kid" (Gus himself) has to rescue a helpless damsel in distress (his ex-wife, who tooooootally shouldn't have dumped him, yo!) from various super-powered villains... who get unleashed into the real world after a freak lab accident and come gunning for Cold Steel and The Girl as if they were still in the game.

So, basically, Gus' petty revenge/empowerment fantasy using his ex's image (without her consent, incidentally) now has her marked for literal death by supervillains on a weekly basis, and somehow he's still the good guy. As a bonus, the conceit of the bad guys being "game enemy" versions of real people he felt had wronged him in the past ends up making him look like even more of a petty, vindictive twit: A Big Boss based on his father and a High-School Bully who throws exploding footballs? Okay, that's one thing -- but there were also evil digi-versions of the ex-wife's mother, a (different) ex-girlfriend and even a car mechanic who once overcharged him.