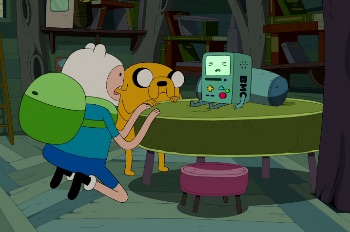 6. FIN, JAKE & BEEMO
Adventure Time (Series)
References direct and indirect to the ephemera of retro gaming (particularly but not exclusively 80s and 90s Nintendo properties) are integral to Adventure Time's fancifully post-apocalyptic headspace, both in the way it leans on an assumed familiarity with fantasy/action game tropes to fill in the story gaps and keep the pace brisk and how it uses that same familiarity to subvert expectations -- most famously in The Great Mushroom War sounding so much like just another nod to Super Mario Bros as to hide the reality of it (and, thus, of Oo's very nature) in plain sight.

But just as the show lives and dies by its characters, Adventure Time's best gaming content comes from the way it informs the relationships and bigger ideas that are at the heart of a series that's all about the main characters (all overgrown children to one degree or another) gradually figuring their own world out. And that's where Beemo comes in.

A sentient robot built in the image of a Gameboy-esque handheld game originally designed to help raise children, in a sense Beemo (and his interaction with the heroes) embodies the wish-dream of "beneficial nostalgia" that seems to be part of the lifeblood of Adventure Time -- that the things we love can be preserved, not just for us, but to reach across time and bring happiness to others.

Okay, so Fry might not be the most positive depiction of... any of the things he's supposed to be (subpar delivery boy, so-so boyfriend, haphazard-at-best universal savior) but he sure is endearing -- and the idea that his gaming skills were about the only virtue of his 20th Century life that carried forward to the 30th (he mops the floor with his "future people" friends in a VR sim in "A BiCyclops Built For Two") feels pretty appropriate.

And yes, the retro-gaming reference-fest in "Anthology of Interest II" is about as good as that sort of thing gets, even if "that sort of thing" boils down to "build an episode out of nostalgia shout outs."