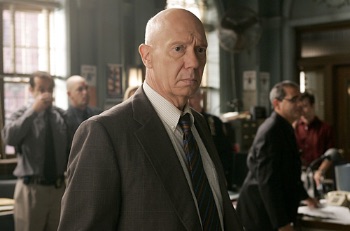 SVU provided the second "worst ever" example on last week's list, so consider this a redemption entry.

To crime fiction fans, Captain Cragen (Dan Florek) wears his life story on the outside with his age, downward-looking demeanor, hangdog expression and world-weary sighs: An Irish NYPD cop from the bad old days who was too resistant to corruption to advance and too decent to quit, with an AA membership and a sad escort-habit (he literally just took them out for the conversation) to complete the picture. It was his job to run defense between The Brass and his detectives as they faced their weekly nightmare cases, not to solve them -- but one time he cracked the case himself... by gaming.

The case in "Care" involves a developmentally-withdrawn foster kid obsessed with a medieval video game suspected in the death of a fellow child. But he's not the real culprit, a fact that Cragen realizes when he discovers a surprising skill for the boy's favorite game and with it a common rapport that ultimately leads them to the truth and the arrest of the real killer.

3. CAPTAIN N
Captain N: The Game Master (Series)
On balance, Captain N: The Game Master is on the middle-plane of iffy 80s/90s game cartoons -- not as good as Sonic: SATAM but better than The Power Team. Still, in terms of premise, you can't do much better than getting yanked into Videoland to become a real-life world-savior hero on the strength of your gaming skills alone.

What stands out, though, is that the series was amusingly upfront about what Kevin Keene being a "game master" actually meant in his era: He'd played all the games, so he knew all the secrets and tricks by heart. Sure, that's not nearly as flattering as what would today doubtlessly be some pandering claptrap about his reflexes and critical thinking skills, but it was a big treat for Generation NES fans all the same. 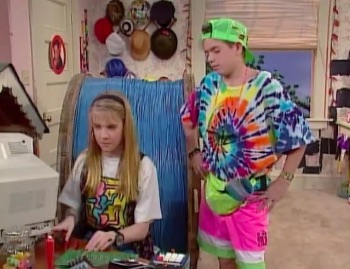 2. CLARISSA DARLING
Clarissa Explains It All (Series)
The quintessential Gamer Girl before there was even a word for it, Clarissa Darling -- as we've discussed at length before -- was in many ways a forerunner of Millenial geekdom: a female Ferris Bueller (sans the sociopathy) who wore and embodied the ephemera of nerd culture unmoored from its once-prized "outcast" status and retrofitted into be-yourself hodgepodge fashionability.

Was Clarissa even a "geek?" She certainly walked the walk. But she was definitely a gamer -- an amateur game-designer, in fact, who used homebrewed PC games as a way of working out her issues with family and friends. It would take games themselves another decade or so to truly go "mainstream," but in Clarissa Darling a generation got its first non-pandering icon who said that gamers could also be well-adjusted, cool, sociable and, well... "hip."