The secret origins of... Supaidaman?

Today, Marvel Comics is one of the most popular entertainment brands in the entire world. Its characters and franchises dominate the blockbuster movie scene, have entertained generations of children as cartoons and are now rapidly expanding into the tough realm of prime-time television. As we speak, they're getting ready to confidently launch a theatrical movie franchise whose principal characters include a talking space-raccoon.

Hard to imagine it wasn't always this way. Hard to imagine that, until the release of the first X-Men movie in 2000, Marvel's biggest success outside the realm of comics was the hit 1978 TV series based on The Incredible Hulk -- a success they spent many years trying (unsuccessfully) to replicate. One of Marvel's many, many small-screen non-starters, as we explored last week, was The Amazing Spider-Man.

Funny story, though... American network television wasn't the only place where Marvel was trying to expand its characters -- including Spidey. At the same time as they were making deals to get Spider-Man on CBS, they were also striking an ambitious licensing collaboration with Japanese entertainment giant Toei by which the two companies would have free reign to use one another's characters. It was a forward-looking plan on both sides: Marvel characters had proved surprisingly popular in Japan (there was even a Japan-specific Spider-Man Manga), while Marvel itself had noted the growing popularity of Japanese movies (or, at least, Godzilla movies) and anime imports like Speed Racer and Battle of The Planets and wanted in on the action. 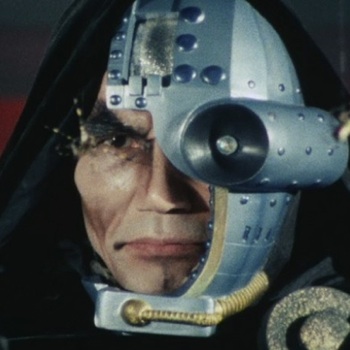 Turning Japanese
Originally, Toei had planned to merely incorporate Spider-Man (or, at least, the familiar Spider-Man costume and powers) into one of its popular live-action tokusatu series as an ally of Japanese folk hero Yamato Takeru (sometimes called "Japan's King Arthur") but decided to instead create a solo series for the Marvel hero. The result was heavily inspired by their already mega-popular insect-themed superhero franchises Kamen Rider. Thus was born: SUPAIDAMAN!

The story: Gaira, the last survivor of Planet Spider, crashes to Earth in his warship The Marveller while being pursued by the intergalactic conqueror Professor Monster. Discovered by brave young motorcyclist Takuya Yamashiro, Gaira gives the boy an injection of Spider Blood which grants him super powers and access to what remains of Gaira's equipment and weaponry (read: the Spider-Man costume, web-shooters and lots of more traditional Japanese TV superhero gear) plus a suped-up weaponized car called Spider-Machine Gp-7 so that he can defend the Earth from invasion by Professor Monster's Iron Cross Army (which, you will be shocked to learn, includes an inexhaustible supply of easily-thwarted henchmen, several scheming generals and a number of size-changing monsters roughly approximate to the number of episodes in the series).