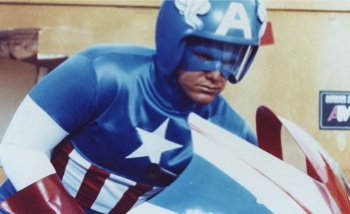 It also tries the hardest to reconcile the more out-there science-fiction ideas of the source with the more mundane expectations of an average prime-time audience, chiefly by swapping "super-soldier frozen since WWII" for a new "legacy hero" backstory: Steve Rogers (Reb Brown) is an ex-Marine traveling the coast in his Cool 70s Guy van working on his art skills (yeah, they kept that) and otherwise just enjoying himself. He's contacted by government agents who knew his father, a straight-shooter hardass who participated in the development of a "super-steroid" (yeah... that wasn't as "loaded" a word in '79) called Full Latent Ability Gain or "FLAG" and was so devoted to his country that he was mockingly nicknamed "Captain America"... shortly before he was supposedly assassinated.

You see where this is going: Steve is mortally wounded in an accident, FLAG is used to save his life and now he's got superhuman abilities to boot, which his new government-scientist pals would like him to put to use fighting evil -- specifically, an oil tycoon running a mad-bomber/Goldfinger scheme in the area. They even whip up a costume for him, based on a sketch he made "inspired" by his dad's Captain America nickname.

The costume is... pretty awful, stuck somewhere between practicality and trying to look like the genuine article to jointly unsatisfying degrees: He's basically wearing blue jumpsuit with wide red/white striped suspenders, capped off by a bulgy blue motorcycle helmet and a pair of useless blue-tinted goggles. The shield is present, but it's transparent and obviously made of plastic (combined with the helmet, it makes him look uncomfortably like a riot cop) to serve dual-purpose as the windshield of his real ultimate weapon, a tricked-out rocket-powered "stealth" motorcycle.

It's pretty terrible looking, but at least you don't have to see him actually wearing the damn thing until over an hour into the feature, which is the definition of a mixed blessing in yet another Marvel TV movie where basically nothing happens. Unlike Doctor Strange, though, Captain America drew decent enough ratings to rate a follow-up feature and an added scene inserted toward the end of some rebroadcasts where Steve requests (and gets) a new costume closer in design to the one from the comics (people complained and, miraculously, they listened).

Captain America II: Death Too Soon has slightly more costumed action, a heavy-hitter villain in the form of the great Christopher Lee and a decidedly Marvel-esque plot involving toxic gas that causes premature aging. The big highlight is an expensive-looking (but not exactly "impressive" looking) stunt sequence where Cap deploys a hang-glider from his bike.

The series, of course, never went forward; but the films have enjoyed a healthy (compared to their contemporaries) presence on VHS and DVD over the years and were early staples for internet video-reviewers. In any case, Captain America was the last (new) Marvel franchise to get its own shot on "grownup" TV for almost a decade -- a few years later the Reagan Administration's deregulation of the broadcast industry opened the floodgates the licensed, action-focused kid's shows and superheroes migrated en-masse to animation Saturday mornings.

It wouldn't be until Tim Burton's Batman revitalized the genre that superheroes in live-action were en-vogue again, and by that time Marvel's sales charts (and thus their TV ambitions) were dominated not by the likes of Peter Parker or sundry Avengers... but by Mutants.

Oh yes. There was a proto-X-Men movie. And if you thought a lot of these movies were bad so far... see ya next week.