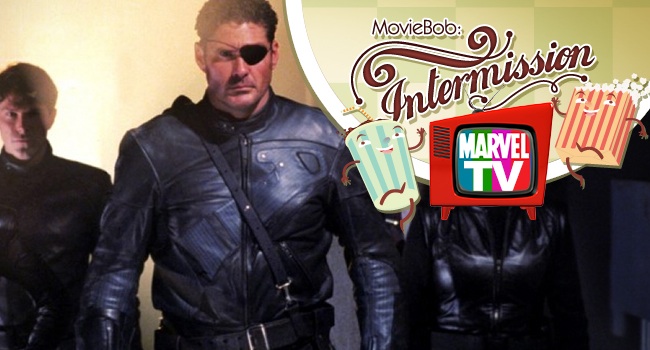 You read that right: in the 90s, David Hasselhoff was TV-movie Nick Fury.

Okay. Let's clear something up about Nick Fury.

The character, as he appears in the Marvel Cinematic Universe, is probably the only genuine example of a dumb meta-joke growing into a character in their own right. He's not exactly the most richly-detailed character in the Avengers social-circle, gifted with maybe a bit more sense of depth than Hawkeye (power-set: Owns a bow. Backstory: Same.) but otherwise he's sketched about as broadly as, say, The Red Skull (description: Nazi, skull face. Personality: Kinda schizophrenically-self-conscious about the face thing.) The MCU Fury is, top to bottom, Samuel L. Jackson as "Popular culture's collective-perception of Samuel L. Jackson, if he had an eye-patch." That's it. Functionally, that's the whole thing.

The MCU Fury is what he is because he's a reference to The Ultimates, an overall pretty dreary comic from the overall pretty dreary "Ultimate Universe." As the title might imply, "The Ultimates" are that world's equivalent to The Avengers, who at the time (in the "normal" Marvel Universe) were still a genial club of superhero pals chilling in an old mansion in New York. The Ultimates, by contrast, are a bunch of grunting jerks and jerkettes who mostly can't stand each other (unless they're having sex with each other, and even then maybe not) assembled via government orders. One of its angles? Imagine what The Avengers would look like as a megabudget Hollywood blockbuster (this was before we found out the answer to that was "Like The Avengers, actually," right down to casting certain characters in the mold of celebrities.

Thus does Ultimate Nick Fury looks like Samuel L. Jackson, and thus did one of only two good things about the Ultimate Universe get immortalized... oh, and it also helped that they used Jackson's likeness without asking and settled what might've been an "issue" by agreeing that Jackson could have the part in any movies they made with him.

The original Nick Fury, though? He's something else entirely.

Short version: In the early-60s, action comics set during WWII became a popular genre as writers and artists who'd served began to translate their experiences to the page. Marvel's most popular book of the type was Sgt. Fury & His Howling Commandos (yes, the guys who served as Captain America's personal squad in The First Avenger). The character was popular enough that, when Marvel was struck by the notion of doing a book aping the then-popular TV series The Man From U.N.C.L.E., Stan Lee and Jack Kirby decided to make a present-day Nick Fury (kept artificially young-looking by "The Infinity Serum") its main character: Col. Nick Fury: Agent of S.H.I.E.L.D.