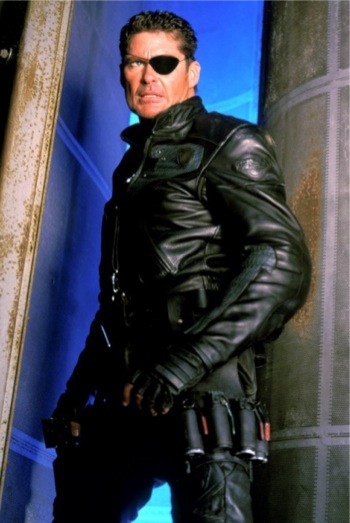 But as a showpiece for cool stuff... there IS some pretty cool stuff in here. The budget keeps things either impressive and briefly-seen (the Helicarrier) or present and cheezy (everything else) in that instantly-identifiable 90s made-for-TV way where everything looks pretty good until it moves or has to be interacted-with in any way -- though, admittedly, a lot of that is due to DVD and HD-resolution presenting television material from this era in a clarity it was never intended to be seen in. It's all very offbeat and goofy in the way that Cold War-era espionage-fetishism was, rendered even more so by the glaze of 90's faux-badassery poured over everything (imagine Austin Powers trying to be Snake Plissken). But beats like the moment where Fury interrupts the Agency brass chewing him out to gun down an interloper who turns out to be a HYDRA robot that subsequently projects a hologram-message from Andrea out of its mouth? Yup, that's Steranko's S.H.I.E.L.D. alright.

The only thing especially "wrong" with it, from a pure entertainment standpoint, is there's sort of a dearth of actual action. There's a lot of heroic posturing, bad guy ranting (Andrea flits around in a black bodice and flowing red cape), tech-showcasing a pounding music score... but there's not really as much happening as you'd expect. This is where a TV budget hurts: You keep waiting for a big shootout or a major fight scene that only ever "sort of" take place.

What holds it all together, believe it or not, is The Hoff. Seriously.

Whatever else you may think of David Hasselhoff, few other actors have come to "own" the ironic-appreciation of their own celebrity as naturally as he did in the 90s. He always looked vaguely like a postmodern caricature of old-time masculinity of the type depicted in old Men's Adventure pulp magazines, and while playing that archetype mostly-straight served him well enough in Baywatch, watching him go scenery-chewing ham full-force as Nick Fury is... kind of incredible: Perpetually-stubbled, cigar near-permanently clenched in his teeth, spitting out whatever dumb one-liner he's handed like it's the most cutting dig imaginable and always looking like he'd rather everything hurry the hell up so he can find the damn bathroom. I almost wish this had gone to series, just to see if he could've stayed in exactly this specific place the whole time.

Unfortunately, that didn't happen. Much like Generation X, this was another expensive pilot that didn't generate the kind of interest that Fox was looking for to greenlight a series. After a few more re-airings, Nick Fury: Agent of S.H.I.E.L.D. slipped into made-for-TV obscurity until being revived for DVD release to cash-in on the popularity of the Marvel Cinematic Universe.

And with that, the age of Marvel Comics as live-action TV properties came to a close for almost two decades. Not long after the ill-fated Hasselhoff venture aired, the Marvel-based action film Blade would become a surprise hit in theaters, lighting a fire under Fox to finally pull the trigger on X-Men and convincing Sony to throw real weight behind Spider-Man, both of which would become massive blockbuster hits that revived the superhero genre in movie theaters and turned Marvel into the new top name in the medium -- with a war chest it would ultimately use to revolutionize the genre as a studio of its own.

In other words... we're out of live-action Marvel shows to talk about. Sad. But, we're still also a little over a month out from Agents of S.H.I.E.L.D.'s season premiere, so the flashbacks won't be stopping just yet. In fact, next week we'll be looking back even further than before, to the beginning of a TV medium where Marvel actually had a lot more real success: Animation.