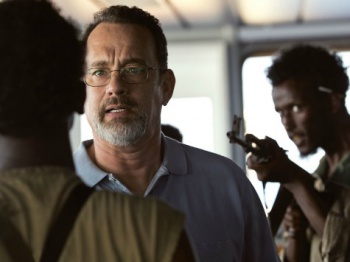 I have a love-hate relationship with director Paul Greengrass, mainly but not exclusively because he's credited with popularizing the use of "shaky-cam" cinematography in serious films. On the one hand, the style has become one of the laziest tools in the Hollywood toolkit, a way to affect "realism" with little to no real effort because the modern audience's subconscious has been trained to associate hand-held camera work with home video or "live" footage. On the other hand, Greengrass himself is one of the filmmakers who uses it to great effect (most of the time.)

Said great effect is on full display in his latest film, Captain Phillips a dramatization of the Maersk Alabama Hijacking incident in which an America ship's captain (Tom Hanks) was taken hostage by Somali pirates and later freed during a punishing raid by U.S. Navy SEALS days later. In some respects, it can be viewed as a spiritual successor to Greengrass's celebrated 9-11 drama United 93 and if one were to include his deeply flawed but well-intentioned The Green Zone - with Matt Damon as a soldier in Iraq discovering that (oops!) those WMDs might not actually have existed - you'd have a kind of rough trilogy covering the beginning, middle and wind-down of what we called "The War on Terror," even if the events of Captain Phillips are not so much adjacent to said War as flavored by it.

On its surface, the story sounds simple. So simple, in fact, that, in the absence of context and a few key details, you might question why it needed to be a major motion picture starring one of the biggest stars on the planet. On April 8, 2009, the cargo ship MV Maersk Alabama was set upon by a small team of armed pirates off the coast of Somalia. Such hijackings (both attempted and successful) are common enough in that part of the sea that said pirates weren't even pretending to try and rob the ship - they merely aimed to occupy it until the shipping company's insurance men turned up with the money to get their employees freed. The operation went south, though, and the pirates wound up fleeing in a covered life boat with Captain Richard Phillips as a hostage. On April 12th, in an atypically public (for this sort of scenario) display of U.S. military power, a team of Navy SEALs rescued Phillips after taking out the remaining pirates with precision snipers.

So yes, a dramatic story... but by no means an automatic qualifier for this needs to be a movie NOW! It was, essentially, happenstances of politics, chronology and geography that made this the one act of modern piracy out of dozens that drew rapt attention (particularly in the United States.) Specifically, the taking of a U.S. citizen by pirates was framed as an early foreign policy challenge for President Barack Obama, at the time frequently criticized as weak and even anti-military by his political opponents. The very name "Somalia" was still inextricably linked in American minds with the Black Hawk Down disaster. And the clean wrap-up of the situation - on Easter Sunday, no less! - with Phillips safe and the pirates struck down with brutal efficiency, was a cathartic happy ending for an American public that hadn't had many in awhile... Not to mention the event was a (there's no less morbid way to put it) massive public relations coup for the Obama administration, beginning an unexpected collective-conscious link between SEAL actions and the reputedly "peacenik" President that would be cemented 2 years later with the killing of Osama bin Laden.

All that extra stuff is the reason why Captain Phillips gets to be a big-time Fall grown-up blockbuster starring Tom Hanks. Which is why it's so surprising that none of it actually turns up in the movie itself. Here's a movie dramatizing an event that is only widely known because of what it meant to those on the outside that decides to remain laser-focused on the inside - President Obama doesn't appear, nor do any important members of the media or government. There are no scenes of the Maersk crew's family members huddled around televisions while famous TV news personalities make expository cameos. The film is entirely concerned only with the procedural actions of three crews - the pirates, The Maersk and the Navy vessel that takes point on negotiations until the SEALS can get into position.

Gallery of the Day: 8 Reasons Tom Hanks Is One Of The Greatest Actors Of All Time DrStrangelove 6 Comments