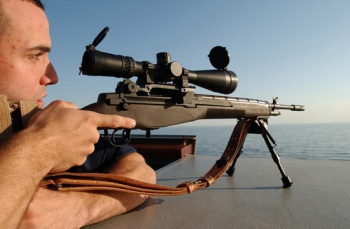 It's also a film that's almost obsessively resistant to politics or symbolism, which is rather vital considering the tinder box of race, class and national conflicts simmering under the surface of its scenario - The gaunt, visibly malnourished Somalis versus the comfortably well-fed American crew. Angry young black men with guns versus frightened older white men without. One of the pirates is undone by virtue of being too poor to own a pair of shoes. "There has to be some other way to make money," Phillips entreats the pirate leader, only to be answered with "Maybe in America." When the SEALs show up, they're presented not as heroes or even as humans, but as something more like the personified wrath of an angry god - with the film offering no real opinion on them save for awe at their granite-hard professionalism. It can't even be bothered to dwell on the dark irony that the Maersk's cargo includes emergency food relief en-route for Somalia. Like Zero Dark Thirty and Greengrass' own aforementioned United 93," it's a movie about people as people - not as symbols.

Greengrass is no sentimentalist, but he's not made of stone either and that becomes the key to making this more than just docudrama. To say that the film shows enough of the pirates for you to emphasize with them would be a mighty stretch, but sympathy is certainly present. The first act gives us a fly-on-the-wall view of the workday for both the Somalis and the Americans, and we're allowed enough of the sense of why the pirates do what they do to grasp their mindset - to say nothing of detachment and the commonness of violence in their lives. During the hijacking, the film draws tension from shifting power dynamics. The pirate's true advantage isn't their guns but language - they speak Somali and English, allowing them to communicate with eachother while keeping their hostages only as informed as the wish them to be. Likewise, Phillips and his crew are on their home turf (such as it is.)

The whole thing is anchored, appropriately, by the performances of the two actors playing the two captains. Appropriately, they're even more mis-matched as movie-stars than their characters are as sea captains: Barkhad Abdi, who plays the nominal pirate leader Muse, is a Somali immigrant raised in Minneapolis (where parts of the film were shot) plucked from a local casting call despite having never acted in a film before; while Tom Hanks is, well ... Tom Hanks - multiple Academy Award winner and just about the only person you could cast as Walt Disney and have people go: "Yeah, that makes sense."

But here they're pitched as equals, two quick-thinkers trying to out-think one another, and it's a relationship (built entirely from a crackerjack, no-filler script and the chemistry of the actors) that keeps the crucial tension building even after we've met the SEAL Team and understand just how fearsomely inevitable their victory is and how staggeringly out-gunned the pirates actually are. Hanks has been on a roll lately (the only justification for his not having an Oscar for Cloud Atlas is that he has two of them already), but he's rarely been as powerfully understated as he is here. This is a movie about heroism, but a heroism of keeping your wits and looking out for those in your care rather than action, which is difficult to pull of onscreen. Meanwhile, I'm not sure what kind of acting future can conceivably be awaiting Abdi (he's rather expertly cast as embodying the American pop-cultural archetype of the desperate/dangerous Somali), but surely being able to keep pace with Hanks has to be worth something.

Captain Phillips could easily have been a simplistic action/rescue thriller or a maudlin made-for-TV potboiler, but instead it's a powerful film even as it tries to strip the mythmaking out of a very human event that became a larger-than-life media moment. The kind of movie that makes the Fall prestige season not only tolerable, but worth looking forward to.

Gallery of the Day: 8 Reasons Tom Hanks Is One Of The Greatest Actors Of All Time DrStrangelove 6 Comments