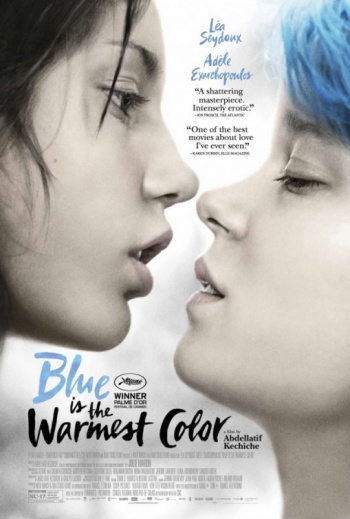 Well, because the film happens to be a years-long chronicle of a lesbian romance between two French girls (one in High School, the other in College); and because the second of those three hours prominently features its two leads (rising Euro-cinema stars Lea Seydoux and Adele Exarchopoulos) engaged in what have been suggested by some to be among the most explicit sex scenes ever presented in a "legitimate" film - one of which seems to run an uninterrupted 8 - 10 minutes and supposedly drew a standing-ovation from its first Cannes audience upon completion. Said sequence is so explicit, in fact, that the stars and their director have been cannily dodging questions about whether or not it was "for real." (For the record, having seen the film myself: Unless one or both of these actresses was rendered with CGI animation, questions of "degrees" are rather beside the point in this case.)

This is, of course, one of those everlasting curiosities of the arts, movies in particular. We see nothing especially wrong with loving action-hero stars like Jackie Chan partially because of our foreknowledge that he really is throwing himself through windows and off buildings, often sustaining very real bruises and breaks in the name of our amusement, but the notion that two (consenting adult) actors might engage in an infinitely more natural act to that same end remains Hollywood's last authentic taboo - partially because it's the only line left to separate the "respectable" film industry from the adult biz, sure... but also because, let's face it, as a culture we're kind of messed up that way.

Still, it's a bit depressing to see such a good film (and yes, Blue is a very good film in its own right) arrive with this spectacle hovering over it. Yes, fine, the sitcom-ready notions of horny High Schoolers and frat-boys making pilgrimage to their local arthouse to "suffer" through lengthy exchanges about Sartre for the chance to gawk at two Parisian maidens doing their best impressions of how Stretch Armstrong might win a fight, or upscale suburban dads surprising The Missus by declaring "You're right, dear - we should go see more foreign films!" are agreeably funny. They're also reductive and do disservice to the overall intent and effect of the film.

The film's story, despite its length, is utterly simple and familiar: Plain, shy, middle-class, unlucky-in-love teenager Adele (Exarchopoulos) jarringly realizes her previously unconsidered attraction to women (or, at least, a woman) when she randomly catches sight of Emma (Seydoux) - an ethereal punk/pixie art student with dyed blue hair (hence the title) - on the street and can't stop thinking about her. Mostly by chance, she encounters Emma again during her first nervous foray into a lesbian bar, where they strike up a friendship that becomes a courtship that becomes an intensely passionate romance that carries both women into adulthood... where, sadly, domesticity and familiarity dull their respective flames and ultimately drive them apart - a state which Emma seems able to cope with but Adele rather definitively is not.

Essentially, the much-ballyhooed love scenes are intense and intimate because everything else is intense and intimate, with director Abdellatif Kechiche's camera seldom pulling back wider than a medium-shot and frequently lingering on extreme closeups of eyes and lips. Exarchopoulos is given to hysterical, snot-nosed, swollen-eyed crying jags as far removed from the dainty mascara-smearing of Hollywood weepies as you can get. To be explicit about those matters, only to then "tastefully" fade to black on each trip to the boudoir would be... well, artistically dishonest - I can't think of a less-pretentious way to put it.

Related to:
bob chipmanblue is the warmest colorhomosexualitymoviebobnot quite pornsex
0
Tweet

Critical Miss: On Gaymers and Cons The Wooster 792 Comments
Comments on