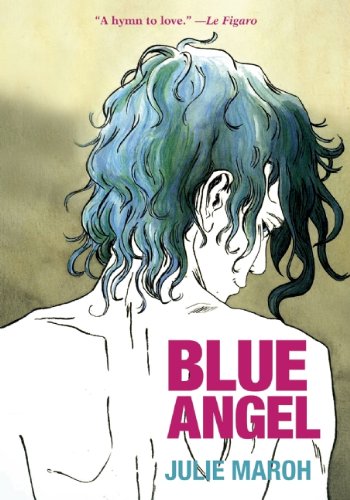 This isn't a "big picture" movie about broad cultural context, it's about the white-hot, rationality-obliterating feelings Emma and Adele stir in eachother, and the way that passion defines and dooms them: The pair have absolutely nothing in common (Adele is middle-class, Emma is a sophisticate; Adele wants to be a schoolteacher, Emma an avante garde painter, etc) other than the intensity of their mutual attraction, and it would seem to consigns them to a tragic cycle of passion/familiarity/breakup/longing/reconnection/repeat so long as they exist in eachother's orbit. Live in happiness, or live in stability - rough choice. To reduce all that to giggling Middle School gossip about who put what closer to where is almost... well, if I may indulge in a bit of irony - obscene.

Interestingly, controversies of an entirely opposite nature have followed the film on its journey as well. Palm winner or not, it wasn't universally acclaimed at Cannes - there weas side-eyed gossip that its victory was more about patriotic French cinephiles rooting for the home team. (For the record, though, the jury this year was chaired by American filmmaker Steven Spielberg.) Or perhaps a coordinated political statement in support of the country's then-raging fight to legalize gay marriage. There was also the expected, but no less tiresome, snarking among film critics trying to foist accusations of bias on one another, in this case the insinuation that the film had earned overly high marks from mostly heterosexual male critics and jurors because... well, do I really need to spell it out?

That secondary accusation got an energy boost when comic-author Maroh voiced her own objection to the by-then legendary love scenes; saying that they reminded her more of male-oriented "girl on girl" pornography than anything authentic. Though she's stopped short of condemning the film itself, it has subsequently come to light that she and Kechiche had never seen precisely eye-to-eye about the adaptation, which diverges sharply from the original novel in its third act. To me, this is the more intriguing set of issues at play: The line between an artist's right to render fantasy, sexual or otherwise, as they so envision and the desire of persons and/or cultures to not feel trivialized as part of said fantasy.

Meanwhile, complaints in the press from Exarchopoulos and Seydoux painting their director as an obsessive taskmaster, which then drew Kechiche himself into a full-scale war of words currently being fought in the international film press. One of the biggest, most talked-about movies on the planet right now... and four of the persons most responsible for its creation aren't on speaking terms? Now that's spectacle!

Spectacle or not, Blue is The Warmest Color is one of the most provocative and intriguing films of the Fall, and by all means worth checking out - providing, of course, that you're lucky enough to have a theater that doesn't ban NC-17 movies in your area.

Related to:
bob chipmanblue is the warmest colorhomosexualitymoviebobnot quite pornsex
0
Tweet

Critical Miss: On Gaymers and Cons The Wooster 792 Comments
Comments on